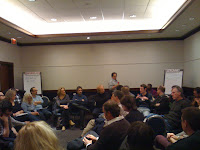 I heard a lot of good music between late Thursday and very late Saturday in New York City. I might've normally been tempted to write "saw" in that opening sentence, but I didn't really see much on Friday and Saturday, except fuzzy headwear and the backs of a lot of tall university students. At a town hall meeting I moderated on behalf of the Jazz Journalists Association on Saturday afternoon (pictured), I also heard a clear delineation about how music should be covered/represented by journalists that split pretty clearly along generational lines.

My own dichotomy was between the perfect sight lines and sound at Birdland, where I caught a set by a revised version of the Overtone Quartet (with Jason Moran, Chris Potter, Eric Harland and Larry Grenadier, subbing for Dave Holland), and two nights of shows at Winter Jazzfest, which drew more than 4000 people to multiple shows at five venues in Greenwich Village. On the first night of Jazzfest, I missed one act I wanted to catch because I was lined up outside a club waiting to be let in (this, with a media pass; as Ben Ratliff points out in this overview from the New York Times, the door staff were making no exceptions). After being admitted, I never made it past the bar area, except to confirm that the sight lines and sound were little better if you forced your way past people into the main room. On Night 2, I had a good spot stage left at Le Poisson Rouge, but was constantly jostled aside and obstructed by others—and at 5'11" and 190 pounds, I'm not a particularly small person. Did I want to leave to hit the bathroom or get a drink before Nels Cline & Stained Radiance—the primary act I was there to see—hit the stage? No. So, the result was like the last time I went to a Bruce Springsteen show in general admission: good proximity to the performer, regularly obstructed views, aching knees (hey, forgive me, I'm heading for 60 here), and an uncomfortably full bladder.

I know...whine and bitch. Suck it up, Hale. But this isn't about me; it's about the potential for growing an audience for new artists and maintaining an audience for established artists. Aside from a few fellow journalists, I didn't see too many people who appeared to be older than 30 at those Winter Jazzfest shows. That's to be expected, and that's potentially a good thing; it's obvious we need to grow an audience for improvised music. But neither did I see too many young faces at Birdland, just as I seldom see too many people under 30 at clubs anywhere where there's a $40 cover and a $10 minimum.

With those realities in place, it was no surprise on Saturday afternoon to hear attendees at my open forum on the future of jazz journalism split clearly along age lines on whether journalists should move past the traditional label of 'jazz' and meld improvising artists into a broad category that includes pop, rock and hip-hop acts. Two things to note on that: one, the notion of losing the 'jazz' tag is nothing new, and two, many of the critics of my generation grew up with an appreciation for a very broad range of artists. But just as most critics younger than 60 have an ear for lots beyond artists who play what is traditionally classified as jazz, there is a huge cadre of people who still think that artists like Moran are barely, or only sometimes, playing jazz. Just bring a turntable onto the stage of any major jazz festival in North America, then listen to the feedback from paying customers who still have a hard time letting go of Dizzy Gillespie and Oscar Peterson. I'd be interested to hear what some of those folks—the folks being targeted by major festival sponsors like Lexus and TD Bank—would say about the idea of ignoring jazz coverage for a more 'balanced' approach that includes artists from Arcade Fire to Jay-Z.

I think that might be reminiscent of the old 'mouldy fig' debates of the '50s.

So, while there's no real news in any of this, the contrast between the traditional model of concert presentation—in one of the world's very successful venues—and the model-of-the-moment has never been more stark.

Will those people who flock to Winter Jazzfest for two nights make the trek to Birdland on one, two or 20 of the other 363 days of the year in 2011 and into the future? No doubt, some of them will. Will any of those well-dressed people paying good money to see big names at Birdland head downtown next year for the sweaty intimacy—and inherent disappointment—of Winter Jazzfest? That's more questionable, in my estimation; certainly, they will have to revamp things substantially to draw me back for any type of serious listening—to say nothing of reviewing—experience.

The result, it seems, is a relatively large gap between twentysomethings who like the buzz of the moment and the aging audience that can still recall when musicians like Herbie Hancock and Jack DeJohnette were young and promising.

Do we have a problem here?
Posted by James Hale at 1:22 PM

Simple answer. No. The term works. It still works.

Hey there James, David Adler here, great to see you. Re the age divide at the town hall forum - do bear in mind that it was 20-something Alex Rodriguez who got pissed, and rightly so I'd argue, over the suggestion that "jazz" is a four-letter word to be avoided.

While jazz continues to be a problematic word to some people, I think it's an oversimplification to blame the term for the public's perceptions or buying habits. And, let's be honest, we're too far down the road to discard it now.

Alex here, echoing what David said, with a few thoughts of my own:

There's a reason this sounds a lot like the "mouldy fig" (as you Canadians spell it) debate of the 1930s: it's similarly pointless!

As a community of writers, I believe it is our challenge to frame a space for discourse that exists between the two poles you identify.

The danger of aligning with the "Birdland" model is that by not reaching out to a younger audience, it gets ghettoized into museum music, what Lara Peligrinelli once compared to eating broccoli.

The danger of aligning with the "Winter JazzFest" model is that the music becomes detached from its rich, powerful legacy that has empowered African-Americans, and runs the risk of being covertly appropriated by the mostly-white presenters, writers and, increasingly, young musicians.

But to lose "jazz" would be a terrible, terrible consequence of this latest round of consternation! If anything, we must EMBRACE jazz as a signifier of a wonderful, creative family that has grown and changed over the past century, and will continue to do so. Sure, it's a bit dysfunctional at times. But calling Child Protective Services to rescue jazz-derived music from its parents is not a useful solution, and neither is disowning its latest incarnation as "not jazz."

A comment I heard at my very first JJA meeting – in Cleveland, back in the mid-'90s – has been front of mind since Saturday. A panel, consisting of Howard Mandel, Neil Tesser and a couple of other fortysomething white critics (as I was, as well) were discussing Coltrane and Miles at a public library in the east end of the city, which was predominantly black. When the floor was opened to questions, an older black woman raised her hand and asked: "Why are you guys sitting up there talking about OUR music?"

That's a comment I try to bear in mind when I write about jazz.

I have expanded upon these thoughts in a longer post at my blog:

Your comments are always welcome! Thanks for contributing to the conversation and getting my head spinning enough to write.