I received word this morning that my friend Joseph "Habao" Texidor died of a heart attack last Friday. Joe told me that he was a troubled young man when he met Rahsaan Roland Kirk one day in Colony Records in New York (Joe had just started work as a clerk in the store, and none of the other clerks liked dealing with Kirk) and his relationship with the saxophonist changed his life. As Kirk's percussionist and "eyes" on the road, Joe went around the world and got an extended education from one of the music's true geniuses.

Joe was a pretty shy, humble guy when I knew him, and over the years we emailed each other to mark the deaths of various people who had passed through Kirk's band. The last time we saw each other we had a Chinese meal in honour of pianist Hilton Ruiz, who was supposed to have joined us before he was murdered in New Orleans.

You won't find anything on Joe in any of the jazz encyclopedias, though he was an integral part of Kirk's recordings in the '70s, which makes me reflect on all the other forgotten and overlooked musicians who live anonymously years after adding to our enjoyment of the music.

You can watch Joe rocking out with Rahsaan on "Volunteered Slavery" here.
Posted by James Hale at 12:41 PM 1 comment: 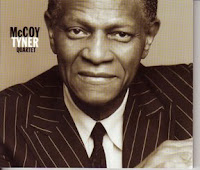 Not surprisingly, pianist McCoy Tyner has tended to avoid collaborations with saxophonists since his years with John Coltrane, and those who have recorded with him inevitably face comparison with the mighty Trane. Seldom, though, has anyone stepped out in Tyner's company with as much authority and brio as Joe Lovano on Tyner's new live quartet recording — his debut on his McCoy Tyner Music imprint for Half Note Records. Lovano stops just short of stealing the show at the concert, which was recorded last New Year's at Yoshi's in Oakland. It's only by dint of having the last word on a solo take of "For All We Know" that Tyner reminds you that this is his recording, not Lovano's. Yeah, Joe sounds that good!

The rest of the band — Christian McBride and Jeff Watts — is not too shabby, either.
Posted by James Hale at 2:06 PM No comments:

Plans are quickly coming together for a memorable program at the Portland Jazz Festival in Oregon in mid-February. Guest artists include Ornette Coleman, Cecil Taylor, the SFJAZZ Ensemble (with Dave Douglas, Joe Lovano & co.), the Bad Plus, Myra Melford and Tim Berne. And that's just the opening weekend!

Like the Guelph Jazz Festival, Portland includes a significant number of workshops and panel discussions, with this year's focus on celebrating and analyzing Coleman's remarkable half-century at centerstage.

Among the events will be an onstage conversation between Howard Mandel and Coleman, and panels featuring me, Mandel, Berne, Melford and others. Sounds like fun, no?

You can check out the plans here.
Posted by James Hale at 4:26 PM No comments:

Music Is In The House

I didn't grow up in a church-going family; in fact, aside from a couple of curiosity-driven trips to Sunday school I didn't set foot in a church until I was deep into my teens. I don't know if that takes the sense of surprise away from concerts in churches (by this point, after numerous years of attending the Guelph Jazz Festival, I've definitely spent more time listening to music in churches than in listening to religious services) but the overblown setting of a particularly spectacular church can still add a dimension to certain musical performances.

Such was the case on Thursday night in Ottawa, when I caught John McLaughlin's electric quartet in a vaulted United church — reminiscent of San Francisco's Grace Cathedral on a smaller scale — and the following evening when I saw Patti Smith in Montreal's magnificent Eglise St-Jean-Baptiste. Both McLaughlin and Smith have woven spirituality into their music throughout their careers, and continue to call on some higher power to guide their art. Not surprisingly, both shows were uplifting: McLaughlin's through his band's soaring themes and lilting melodicism; Smith's through her devotion to wayward souls (quoting Ginsberg, Hendrix and Cobain among others) and her powerful call for audience members to speak out against oppression. Looking up at the opulent, rococo decorations of the cathedral, she said that brotherhood was the best message the Catholic Church had to offer. The two nuns seated in front of us would likely have agreed had they not already bailed (one had been nodding off) during "Smells Like Teen Spirit."
Posted by James Hale at 10:54 AM No comments: 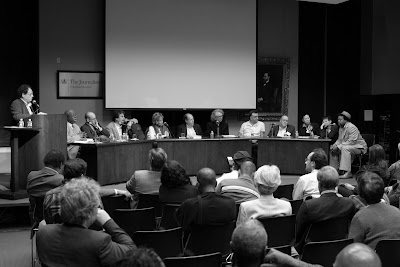 It really shouldn’t surprise me that the highlight of the one-day international symposium of jazz journalism, held Saturday at the Columbia University School of Journalism, was a piece of film that’s almost 50 years old. Amid more than 20 presentations – including my own on the cultural, economic and esthetic imperatives shaping contemporary jazz musicians – the most captivating few moments were delivered courtesy of a Swedish television program featuring Sonny Rollins, drummer Eddie Jones and bassist Wilbur Ware. Rollins – looking impossibly young, fit and patient with his Swedish host – was a breath of unfiltered, unquestioned and unadulterated fresh air – among many barbed comments, snipes, sidetracks and self-serving commentaries.

It never fails at these cultural symposia, music trumps scholarship – and the rarer the better. Even the longest-toothed among us had never seen this Rollins clip, and Swedish jazz historian Lars Westin wasn’t about to let it leave his hands, despite entreaties from my new friend Alain Derbez, who's about to launch a jazz television program on Mexico’s public broadcaster.

Ah, hey, we’re jazz journalists: over-caffeinated, over-opinionated, and over-stimulated by 48 hours of hanging with our peers and related brethren at the first-ever of these globally focused gab fests. Hats off to George Lewis (who is as adept an arts/academic administrator as he was a trombonist) and my pal Howard Mandel for making this happen. The vibe at the opening night cocktail party and hang at Harlem’s famed Lenox Lounge was electric. As British jazz writer and philosophy professor Andy Hamilton told me, “I’ve never met so many people I know through their bylines or email addresses.” If you weren’t catching up with someone you hadn’t seen in months, you were comparing notes with someone whose life revolves around the same central love.

Sometime in January, when Lewis’ new jazz studies program at Columbia gets its official launch, the daylong proceedings will be available as a streaming videocast (I’ll post details here). Until then, if you’re interested in an overview of the proceedings, log into the online discussion we posted during the event at the Jazz Journalists Association site. If you have any questions or comments, feel free to add them: Mandel, myself and others will be monitoring the open discussion and adding comments, answers and second thoughts, as required.
Posted by James Hale at 8:48 AM No comments: