Journalists On The Bandstand

In Ottawa, November will be a significant month for two of the city's best-known musicians—both of whom also happen to be well-known journalists.

Pianist Murray, Gordon, trombonist Jerry Heath, bassist Sol Gunner and drummer John Sullivan started playing together in Kingston in 1960, at a house four of them shared while attending Queen's University. They also shared an interest in the hard bop popularized by Art Blakey and Horace Silver, and in the West Coast sound of Gerry Mulligan and others.

The band dispersed in the early '60s, but reunited—minus Sullivan—for several gigs in the '80s and '90s. In 2000, veteran drummer Scott Warren joined the ensemble. The NAC anniversary show will be partly a band retrospective, but several new original compositions will also be included.

An astute jazz critic (he and I shared reviewing duties at The Ottawa Citizen for a decade) Hum has long had his performing career on a slow boil while he raised a family and developed his journalism career. Backed by a superb band—saxophonists Nathan Cepelinski and Kenji Omae, bassist Alec Walkington and drummer Ted Warren—he recorded an album of highly lyrical original compositions after playing them in public a couple of years ago. Those who witnessed that show have been anticipating the eventual CD.

Omae, who lives in South Korea, won't be at the launch, but he'll be replaced by another of Hum's longtime collaborators, guitarist Mike Rud.
Posted by James Hale at 4:16 PM No comments:

It's getting to be that time of year again, and I've been weighing the options for the annual top 10 CD list. Some of the usual suspects—Vijay Iyer, Mary Halvorson, Jason Moran—are back in serious contention again this year.

I'm not sure it will have the staying power to crack the top 10, but one recording that has impressed me lately is Alexander McCabe's Quiz, which I recently spent a lot of time with for an upcoming DownBeat review. What I do know at this point is that if I was nominating a single track of the year McCabe's version of "Good Morning Heartache" would be at the top of the list. Wow! A stunning performance, very much in the vein of mid-period Coltrane without being slavish to Trane's sound (for one thing, McCabe plays alto, not tenor).

McCabe might not be a name you know. He's a Boston native who's in his late 40s, but he's only done a couple of previous recordings under his own name. Quiz is definitely worth a listen, and "Good Morning Heartache" will knock you out if you're a fan of Crescent, "My Favorite Things" or "Afro-Blue."
Posted by James Hale at 7:56 PM No comments:

The Mid Atlantic Arts Foundation announced its latest Jazz.NEXT grants—amounting to $462,350—on October 13, and among grants to the Berklee College of Music, trumpeter Dave Douglas and the Jazz Journalists Association, one that caught my imagination was a $93,600 grant to New York City's Symphony Space.

Located on the Upper West Side, Symphony Space has always struck me as a forward-looking venue with a very broad artistic mandate. I have particularly fond memories of the 12 hours I spent there experiencing the free Wall-to-Wall Miles Davis performances about a decade ago.

Through its Jazz.NEXT support, Symphony Space will develop The Symph App, a smart phone application that will allow people who own an iPhone, iPad, Android or Google TV to stream jazz performances. An open-source app, The Symph App will also be made available to musicians, other venues and the jazz community at large for their use. The app is scheduled to launch next spring, when at least 34 jazz events and discussions will be made available.

Also mentioned in the grant announcement is the fact that Symphony Space will be releasing more than 100 live recordings, including jazz.
Posted by James Hale at 3:46 PM No comments:

Despite the jazz tradition of 'sitting in', it's remarkable how seldom I've actually seen someone appear unannounced with a headline act and get the feeling that I'm witnessing something unrehearsed and fully in the moment. 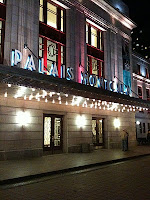 I was having mixed feelings at last night's concert by The Mingus Dynasty at the Quebec City jazz festival—aside from a spirited take of "Ysabel's Table Dance," the band had seemed a bit listless, with a high number of onstage conferences and on-the-fly arrangement coaching. Then, in the second half of the show, leader Craig Handy introduced special guest Kurt Elling—who headlines the festival tonight. 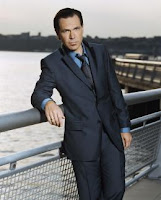 Wearing jeans instead of his de rigueur slick suit, Elling blew the room apart with his version of Mingus' "Goodbye Pork Pie Hat," encouraging tenor saxophonist Seamus Blake to roll out the kind of multi-tiered, lyrical solo that made me fall for his playing when I first heard him in the early '90s. Elling was sweating, Blake was burning, the whole band playing like Mingus himself was kicking their behinds.

It was one of those moments when all you can do is tell your friends, You had to be there.
Posted by James Hale at 4:37 PM No comments: