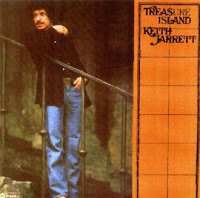 Treasure Island – the fifth album released by pianist Keith Jarrett's so-called American Quartet – begins in what sounds like the middle of a performance, the band already churning on Jarrett's "The Rich (And The Poor)." Driven by Charlie Haden's bass, it's a slow groove that sounds like some of the extended vamps improvised during his solo concerts of the time. Recorded on the final two days of February 1974, Treasure Island actually features an expanded band, with guitarist Sam Brown on two pieces and percussionists Danny Johnson and Guilherme Franco throughout. Those added percussionists are well used, too, as the band explores some funky movements – making Treasure Island one of the more exuberant recordings in the band's catalogue.

On "The Rich (And The Poor)" the percussionists balance the weighty theme and Jarrett's gospel-inflected piano trills with what sound like a bicycle bell and a child's metallic noise-maker. On "Fullsuvollivus (Fools Of All Of Us)" Johnson and Franco stir up a cacophonous backdrop to the quartet's cascading improvisations. Jarrett's piano pulses with energy, Redman reels out a declaratory statement. What struck many listeners at the time—and what remains so attractive about the performance now—is that this was clearly music with American roots, abstracted but not obscured. There is no mistaking the relationship to what the Art Ensemble of Chicago had been doing a decade earlier, and yet Jarrett's take sounds like it is coming at the source material from a classical perspective.

Another element that makes Treasure Island compelling is the accessibility of the material. On the title song, Brown and Jarrett trade the lead on the bright, upbeat melody—their tones and attacks almost indistinguishable from one another, while the theme of "Introduction/Yaqui Indian Folk Song" is almost pastural. "Le Mistral" has a strong pulse running through it, and Jarrett's playing on "Death And The Flower" is rhapsodic. Only "Angles," with its flatulent bass solo, brawling tenor and Ornette-informed head strides outside the comfort zone that buyers of The Köln Concert might be happy living in.

From the somewhat iconic photographs of Jarrett to the detailed map work in the ornate cover art, Treasure Island stands as the least thorny, dare-I-say-it, most commercial release by the American Quartet. Little wonder, then, that the album was reviewed in Rolling Stone and other mainstream music publications of the time, and remains an ideal entry point to the band for those who are familiar with the latter-day Jarrett.
Posted by James Hale at 2:59 PM No comments:

Here in Ottawa, you would be challenged to find a bigger civic booster than Ken Gray, a columnist, editorial writer and blogger for The Ottawa Citizen, a daily newspaper that was also my home as a columnist for 10 years. To his credit, Gray is always looking for ways that Canada's capital city could expand its horizons—methods that include playing host to major international sporting events and paying attention to urban theorist Richard Florida.

Gray is also a jazz fan, and he has taken to using his summer vacation days to immerse himself in the music at the TD Ottawa International Jazz Festival. This week, he's back at work and reflecting on 11 days spent inside the "Gold Tent"—the white vinyl enclosure that sits to the left of the festival's main stage in Confederation Park (that's it over my left shoulder in the YouTube video posted below). He focuses on the non-jazz activities inside what he calls a "crypt," which include people BlackBerry surfing, gourmet sandwich eating and chatting—anything but responding to the exhortations of Kenny Garrett to get up and dance.

I've spent my own time inside the "crypt"—both as a paying customer before being employed by the festival as a media consultant and during brief moments on the job—and can attest to Gray's observations that the people in there sometimes seem less interested in what's happening on the stage than in the latest memo their boss has emailed to them. But, where Gray is off base in his efforts to make Ottawans seem like hicks who need to get with the program and act like they live in a world-class city is in believing that concert-goers in other cities act differently. I've seen the same types of behaviour at jazz festivals in San Francisco, Vancouver, Montreal and, yes, New York City. In Spain, I've seen audience members at jazz concerts more excited by the pintxos they buy between acts than headline performances.

One of the best things about festivals is that they welcome all comers. During my 24 years observing Ottawa's jazz festival I've seen the same people over and over. Some of them bring a book to every concert. Some of them treat the concerts like background music as they unpack picnic baskets and sip wine from plastic cups. Some of them seem to lack any grace whatsoever (to the woman who held a loud conversation on her cellphone during the percussion workshop last week, may your BlackBerry be stolen). At least they are there, and hopefully repeated exposure will improve their appreciation.
Posted by James Hale at 8:53 AM No comments:

Outside my office at the Ottawa jazz festival, I answered a few questions for a reporter about the importance of music education.

A Few High Notes To Finish

The 30th edition of the TD Ottawa International Jazz Festival wrapped up last night, ending with an exhilarating performance by Tomasz Stanko's quintet—which might well have garnered many people's nomination for best indoor performance, had it not been for the stunning show that trumpeter Christian Scott gave in the same venue two hours before.

Exposing listeners to relative newcomers like Scott at the same time as giving them a rare opportunity to experience masters like Stanko is what the festival does best. This year, it also did a good job at giving large outdoor audiences what they wanted: a chance to be uplifted by party music from the likes of Smokey Robinson, Kenny Garrett and John Scofield. So, it was appropriate that a large crowd was still shaking it in Confederation Park to Sharon Jones & the Dap-Kings in the moments after Stanko had finished indoors.

As usual, The Ottawa Citizen's Peter Hum has written a thorough overview of the festival as he saw it.
Posted by James Hale at 11:08 AM No comments:

I played hooky from Ottawa's jazz festival last night to head down the road two hours to Montreal to catch the trio of Lou Reed, John Zorn and Laurie Anderson. It promised to be entertaining; it was that in more ways than one.

What began as a capacity audience was reduced by about 20 percent after the first, long piece—which was greeted by loud, sustained booing, catcalls and angry expletives all around me. Those who were clapping seemed to be momentarily overwhelmed.

"Play some music," yelled someone behind me and to my left.

"If you don't think this is music then get the fuck out of here," shouted Zorn, dismissing the booers with both arms.

What were these 500 or so disgruntled people expecting? Versions of "Sweet Jane" or "Walk On The Wild Side?" Perhaps an electronic rendering of Zorn's later, peaceful film music? Maybe for $100 and up they were expecting a show that met each and every one of their individual wishes.

What they received were huge slabs of sound, led mostly by Reed's heavily processed guitar with Zorn's manic, overblown alto roaring over top. Anderson acted mostly as the tiller person, steering this massive craft with slashes and filigrees. At its most noisy, it resembled Metal Machine Music meets Albert Ayler, which was stimulating, but there were long swatches of great beauty, as well.

After a main set of about 63 minutes, and a generous encore, the musicians stood and waved to prolonged cheers, acknowledging those who had remained open enough to see where the journey went.
Posted by James Hale at 9:06 AM 1 comment: