I have a hard time even beginning to think about how important so-called alternative weekly (or alt-weekly) newspapers have been to culture in North America. The Village Voice, Boston Phoenix, Boston Real Paper, Washington, D.C.'s, City Paper, Toronto's NOW and dozens of others have been essential links between arts-hungry readers and artists and arts venues that could not afford to advertise in mainstream media. Needless to say, many of these papers have also played an essential role in providing a broader view of local politics, business and sports than large dailies could provide.

I have no trouble expressing how important they were to my own life: I got my first paying journalism job at one, met my wife, gained exposure to countless artists, and learned much of what I know about running a business.

What's more, over the past 35 years, I've seen many of the best music journalists I know get their start at various alt-weeklies.

Rachael Daigle—a veteran of the alt-weekly trenches herself—has written a detailed piece on the decline of the format, and how she and others believe it can be reborn.

Perhaps the most-insightful comment in the article is by Jeff Lawrence, publisher of Dig Boston, who says that the competing Boston Phoenix didn't die because alternative media is dying, but because it could not find a way to adapt to the new landscape.

Indeed, if any form of journalistic endeavour should be able to change with the times, it is the alts. They have typically attracted management that relishes finding new ways to survive, and they have a young audience willing to use alternative means to get the information they want.

Here in Ottawa, since 1978, I think I've contributed to at least four alt-weeklies that didn't make it, but I am more encouraged than ever that this type of journalism will continue to find a way to survive. What inspires my confidence are the efforts of several very smart, well-financed people I've met recently who are building new models to connect citizens to culture. When I look back on what killed most of the alt-weeklies I knew intimately, it was usually hard costs and hard realities—realities like printers who refused to run the next week's issue without cash up front. I think emerging technologies are finally where they need to be to provide a foundation for new formats. Now, publishers need to put the components together to make successful business models—ensuring that advertisers see value in the product and that contributors are fairly compensated.

We are not there yet, but it's getting closer.

Don't let my silence here at JazzChronicles make you think that nothing is happening in my little world o' jazz. On the contrary, I've been hearing so many good things that I can already safely predict that selecting this year's Top 10 list is going to be a mighty task... and the weatherman is still predicting upwards of 30 cm of snow up my way. So you know that there has been an unprecedented load of great recordings on my desk to date.

Starting from the top: Remember when I decried how long it's been since drummer Jack DeJohnette put out one great album after another? The new year had barely begun when ECM hit me with Special Edition, a four-disc collection of his best stuff for the label.

Next, thanks to the mighty Aaron Cohen, my assignment editor at DownBeat, I discovered San Francisco trumpeter Ian Carey, whose Roads & Codes is one of the freshest albums I've heard in a long time.

In mid-January, the new Chris Potter recording, The Sirens, also on ECM, lived up to expectations. This is one album I need to spend more time with, and I know I'll return to it.

Jump forward a month, and it was a one-two punch with a great set of duets from Charles Lloyd and Jason Moran, and Dave Douglas' new quintet album, Time Travel. Both of these acts are at the top of the list of things I'd like to hear live this year. 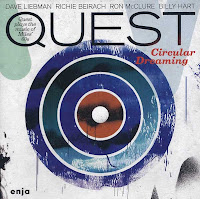 A week or so later, I was hit with a terrific all-star recording by Quest, the co-operative group that features Dave Liebman, Billy Hart, Richie Beirach and Ron McClure. This time out, they're exploring the music of Miles Davis' mid-'60s quintet. What's not to like there?

So that's a half-dozen solid contenders for the crown in mid-March. And, of course, there are more I haven't gotten to yet, or recordings that have yet to work their magic on me. Right here on top of the listening pile is the new Tomasz Stanko New York Quartet, for example. One of my favourite bands. And, over there, the new Robert Hurst that is already creating some great buzz. And, what's that? Two new recordings by Ben Goldberg. They definitely require some attention.

If there's another silence between posts, you'll know what I'm up to.
Posted by James Hale at 9:04 PM No comments: