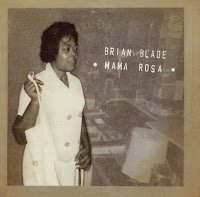 Not a jazz recording, but I couldn't resist diving immediately into this rootsy, soulful solo CD by one of my favourite drummers in jazz. The first time I interviewed Brian Blade, about a decade or so ago, he made it clear that his influences were the church, Levon Helm and soul music. Even as he was making waves with Wayne Shorter and other older giants of jazz he was in the studio with Joni Mitchell, Seal and Daniel Lanois. Lanois plays a large role on Mama Rosa—appearing on six of the 13 tracks and holding sway over the general sound of the recording, although Blade produced it himself, along with Adam Samuels. Blade's voice, like Lanois', is effective without being a perfect instrument. His dedication to this music is clear—as clear as his devotion to swinging like a monster behind Shorter, et.al., illustrated in his frequent whoops on various recordings and those times when he plays himself right off his drum throne—and he shows himself to be a better-than-average lyricist, as well. This is a quiet, little gem of a record I'm going to savour over the coming days. 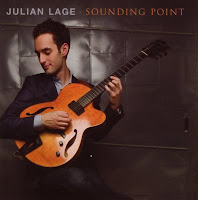 Guitarist Julian Lage comes highly recommended by my friend David Adler, who knows a good picker when he hears one. I admire Lage's reach on the recording—everything from pieces inspired by Bernard Hermann's film music to Neal Hefti's "Lil' Darlin'"—and there's no denying his impressive technique. That stated, Sounding Point didn't move me much. I prefer more grit to my guitarists than Lage brings, and my tolerance for gypsy-style playing is low. I'll admit to those prejudices, and recommend this to anyone who enjoys Bela Fleck—who puts in an appearance on three of the 13 pieces—or Birelli Lagrene. 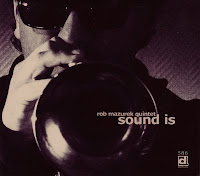 I've enjoyed cornetist Mazurek enormously both times I've seen him recently at the Guelph Jazz Festival, largely because I found what was going on with his music so mysterious. Particularly with his electronic Brazilian project, his sound is so gauzy and shifting that it's hard to get a fix on him. Heavily featuring vibraphonist Jason Adasiewicz and Tortoise drummer John Herndon, this new quintet is more focused but no less mysteriously compelling. Like late-period Miles Davis, Mazurek prefers to be a colorist, and his vision as a composer and sound organizer always seems to be on a large picture. Without pushing the visual art metaphor too far, Sound Is strikes me as a big canvas filled with strong, bold slashes of movement.
Posted by James Hale at 9:47 PM 2 comments:

Ornette Among The Guns

In the 50 years since he scaled stylistic barricades at New York City's Five Spot it's unlikely that Ornette Coleman has ever played a gig in as bizarre a setting as he'll find himself in on July 11. As one of about 2,000 performers at this year's Cisco Ottawa Bluesfest, Coleman and his quartet will perform flanked by tanks, army trucks, artillery pieces and armoured personnel carriers inside a glass-walled display area of the Canadian War Museum. The LeBreton Gallery—the "military technology" wing of the museum—has a distinct aroma of cordite and engine grease and is usually the site of military band performances.

But, who knows, maybe Ornette will dig the silver jet that's poised for takeoff.
Posted by James Hale at 8:46 AM 2 comments:

Buzz has a funny way of altering your perception. While I'm sure I'd caught wind of composer Darcy James Argue at some point—hard to miss an up-and-coming young musician here in Canada, after all—the infectious word of mouth that surrounded him at last year's International Association of Jazz Education conference in Toronto has erased anything that went before. The performance by the Canadian version of his big band, Secret Society—featuring an outrageously gifted trumpet section—was on the lips of everyone who caught it, and his views on digital marketing were the best illustration of the gaping divide between his generation and the establishment core of the soon-to-be-defunct IAJE. Few musicians since the initial headline-grabbing burst by Dave Douglas in the mid-'90s had become so ubiquitous as fast as this young Vancouverite. 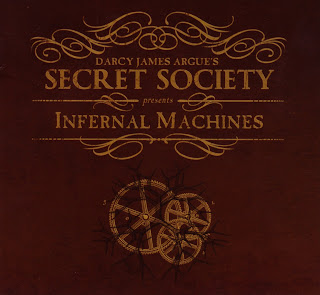 One of the things that has set Argue apart is his willingness to share his music on his blog, yet the release of his debut CD, Infernal Machines, has been much anticipated by those who have heard him compared favourably to fellow Bob Brookmeyer devotees Maria Schneider and John Hollenbeck. I've been enjoying a digital download of the recording for a few weeks, but—given that this is a big band—have been holding off on a review until I could savor it in its full depth on my main stereo rather than through my computer's speakers.

Although it's Brookmeyer who is mentioned most frequently as Argue's main influence, I hear a lot of George Russell on Infernal Machines, too, especially on "Zeno," where guitarist Sebastian Noel stirs up some power chords behind Ryan Keberle's trombone solo, and in the raucous outro to the opening "Phobos." Gil Evans' tremendous bands from his days as the house band at Sweet Basil in the '80s are another touchstone, and Argue himself swears allegiance to the early Thad Jones-Mel Lewis band in this post.

A strong trumpet section is one of Argue's MO's. Here, it's led by Seneca Black, and features Ingrid Jensen, Laurie Frink, Nadje Noordhuis and Tom Goehring. Argue's voicing of them on "Transit" and "Redeye" is feather-light and creates the feeling of flight—the only time his writing resembles Schneider's.

Where he creates his own space as a big band leader is in his use of elements not often heard in the canon, such as the cajon that chatters throughout "Phobos," the electric guitar noise that snakes through "Redeye," and the political conceit at the heart of "Habeas Corpus"—a piece written to honour Canadian computer engineer Maher Arar, who was shipped to Syria by the U.S. government and tortured for 10 months. On "Jacobin Club," the horns move woozily over Jon Wikan's rattle-trap snare and Mike Holober's spiky keyboard accents, while on "Obsidian Flow" they shimmer in a chorus of Philip Glass-like repetition. Although Argue frequently creates tension by constraining the 18-piece orchestra somewhat, he knows how to turn them loose to great effect, as he does in the climax of "Habeas Corpus."

An exciting stylist with an abundance of ideas, Argue deserves his place alongside Schneider, Hollenbeck and other contemporary big band arrangers who are looking beyond traditional notions of what a large jazz orchestra should, and can, sound like.
Posted by James Hale at 1:30 PM 1 comment:

Join Us In Ottawa

Jazz Matters
Jazz Matters is an educational initiative of the 400-member Jazz Journalists Association. Jazz Matters brings together leading writers, broadcasters and online journalists from around the world to explore the history of the music, discuss key recordings and performers and debate significant issues.

Modern Jazz Piano: From Monk to Moran – June 29
The language of jazz piano has broadened and evolved in the post-war decades, encompassing such wildly divergent exponents as Ahmad Jamal, Cecil Taylor, Paul Bley and Oscar Peterson. What are the common threads and points of departure? Who are the unsung heroes of the instrument and which recordings changed the sound of jazz?

1959: The Wonder Year – June 30
Try to imagine a year that produced genre-defining artistic statements like Miles Davis’ Kind Of Blue, John Coltrane’s Giant Steps, Charles Mingus’ Mingus Ah Um, Dave Brubeck’s Time Out, Thelonious Monk’s triumphant concert at Town Hall and Ornette Coleman’s New York City debut. What was in the air – culturally speaking – that year? What forces combined to produce some of the most-enduring recordings in the evolution of jazz?

To celebrate the 50th anniversary of this miraculous year in jazz history the panel will include: Ashley Kahn, NPR commentator and author of The House That Trane Built, Kind Of Blue: The Making of the Miles Davis Masterpiece and A Love Supreme: The Story of John Coltrane’s Signature Album; Mark Miller, author of eight books on jazz and former Globe and Mail contributor; DownBeat magazine writer James Hale; broadcaster Ron Sweetman (NME’s Paris correspondent in 1959); trumpeter and veteran journalist Charley Gordon; Jesse Stewart (Carleton University music professor and percussionist); and Alan Stanbridge (University of Toronto and author of the forthcoming Rhythm Changes: The Discourses of Jazz).

You can find the full lineup here. Hey, Ottawa's great in the summertime (not so much today, with snow back on the ground). C'mon up!
Posted by James Hale at 1:59 PM 1 comment:

Today, I began in earnest my year-long re-examination of the music of Cecil Taylor, starting with the 1956 recording, Jazz Advance.

As with last year's exploration of Anthony Braxton, the challenge is to try to forget what you already know of the artist's work, the arc of his career, etc., and approach this music with fresh ears. At the same time, you want to consider the historical context of the work at hand, which often leads to the fullest appreciation of just what is being achieved and to what extent the artist is bringing new vision to the art form.

I'm not an academic, so my predominant approach to the music parallels what Nat Hentoff recommends in the liner notes to the reissue of Jazz Advance: to ignore the intellectual to concentrate on the emotional. This is not a problem with pieces like Taylor's interpretation of Monk's "Bemsha Swing." Even 53 years after the recording it is impossible to overlook the joy in Taylor's approach to the composition, the dancer's feigns and double-steps, the way he moves around the notes. For example, the way he reinvents the melody as he "re-states" it as an outro – giving just the barest hint of it, yet expanding on Monk's original line.

Even without the knowledge of everything that has come since (ah, the anticipation of so many pleasures to re-discover!) it is obvious that this Cecil Percival Taylor is a dancer, a poet, a man whose imagination can only be hinted at through what he does at the keyboard.

A wonderful thing to consider on a beautiful spring day.
Posted by James Hale at 2:36 PM 1 comment: