Sad news that the great Jimmy Giuffre has died, just two days before his 87th birthday.

One of the giants on the clarinet, Giuffre's band with Paul Bley and Steve Swallow was groundbreaking and remains one of the benchmarks for many improvisers.

Update: Watch for my appreciation of Jimmy Giuffre's life in the August (Critics Poll) issue of DownBeat, out July 15.
Posted by James Hale at 12:59 PM No comments:

Recently, I was engaged by a prominent Canadian musician in a spirited email exchange about the pros and cons of jazz festivals. His main point was that too many non-jazz artists get gigs that should go to jazz musicians, but an underlying refrain was that festivals give the illusion that a city has a thriving jazz scene, when in fact 90 percent of the year's expenditures on jazz are concentrated in a 10-day or two-week period.

There's little denying either point. You don't have to look too far to find jazz festivals rife with performers like Al Green, Gladys Knight, Leonard Cohen, Billy Joel and others who have – at best – tenuous connections to jazz. And, aside from New York City and one or two other large cities, it's likely that the lineup of any festival you care to name overshadows the jazz gigs you'll find throughout the rest of the year. So does that mean that jazz festivals have outlived their usefulness 54 years after George Wein launched the first one in Newport, Rhode Island?

As my colleague Dan Ouellette points out in the current issue of DownBeat, there is a diminishing number of "name" jazz musicians – players who can draw audiences beyond their regular fan base. That was an issue back in the late-1980s, when I was briefly involved in the administration side of jazz festivals. After you had exhausted the Dizzy Gillespies and Benny Goodmans, where did you go next? Sure, there is always an audience for first-rate artists like Brad Mehldau or John Scofield, but does your father, your spouse or your niece know their names? Who's more likely to make them part with their money and make some time in their schedule: Dave Douglas or Gladys Knight?

I had dinner last night with a friend who's excited that Knight is coming to Ottawa's jazz festival. He's a discerning music fan, and he'll enjoy whatever else he hears at the festival, but it's Knight who'll get him into the park. And that's where festivals really do their work at expanding the tastes of their casual attendees. Among some, jazz still has a reputation of being "hard" music, and only first-hand exposure can overcome that.

As for "stealing" gigs from local musicians, the best festivals I've seen build lots of local content into their lineup (and I have to disagree with those hometown players who think they deserve a prime-time slot or the kind of fee that Wayne Shorter or Maria Schneider can command). What's more, I know of dozens of younger jazz musicians who caught the bug and focused their ambition by being exposed to – and in some cases, jamming with – established artists.

So, yes, sometimes the sound is less than optimal and the audiences often aren't as reverent as you'll find in a club, but jazz festivals pump a lot of revenue into the industry and build audiences. There's probably not a local jazz scene anywhere – even New York City – that couldn't be improved, but I don't think festivals are to blame.
Posted by James Hale at 5:42 PM No comments:

For those in the vicinity of Ottawa – my home base – it's easy to overlook the significant jazz content in this year's Bluesfest lineup announced today.

On July 3, Cassandra Wilson will perform at 9:30 p.m. She's about to release a new album called Loverly, which features her unique take on a number of standards. Not sure who's in her touring band, but the recording has great work by pianist Jason Moran. (Update: It looks like Wilson is touring with Reginald Veal, Marvin Sewell, Jonathan Batiste, and two astounding percussionists, Herlin Riley and Lekan Babalola.)

On July 6 at 6:15 p.m., it's James Blood Ulmer. Might be his first-ever performance in Ottawa unless I was out of town when he was here before.
Posted by James Hale at 4:52 PM No comments:

The International Association for Jazz Education officially filed for Chapter 7 bankruptcy, simultaneously announcing the cancellation of its 2009 convention, slated to be held in Seattle next January, and the immediate closure of its headquarters in Manhattan, Kansas.

For my profession, what this business failure means is the death of an annual sharing of information. Since integrating the old JazzTimes Convention a number of years ago, the IAJE convention was the place where journalists and others on the "industry" side of jazz gathered to trade ideas, renew friendships and get re-energized for the year ahead. More specifically, for the Jazz Journalists Association, on whose board I serve as vice-president, it was a chance for us to help educate young journalists and develop our own chops through workshops and panels.

IAJE will definitely be missed, but knowing the dedication and enthusiasm that exists among jazz educators at all levels I have no doubt that something will rise from the ashes. It will just take time.
Posted by James Hale at 10:04 AM 2 comments:

More On The Mess At IAJE

What my friend and JJA colleague Willard Jenkins calls "a house of straw" is starting to blow away faster than I predicted. The financial disaster at the International Association of Jazz Education is evolving rapidly, and Willard has several revealing posts about it on his blog. And check out some of the comments in response to his posts to see the level of hostility, back biting and back stabbing that's going on as the straw comes down.

An addendum on April 15: Apparently, the IAJE's board has now voted to file for Chapter 7 under U.S. bankruptcy law, which is the liquidation of property for distribution to creditors.
Posted by James Hale at 4:27 PM No comments: 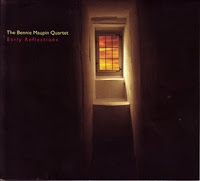 Bennie Maupin is back... with a vengeance. Maupin was one of my favourite reed players in the '60s and early '70s – and remains at the top of my list of bass clarinetists. I discovered his work when he was a member of trumpeter Lee Morgan's band. Morgan's recording Live At The Lighthouse is an overlooked landmark recording of the time. Of course, Maupin was also a cornerstone of Miles Davis' band, making mammoth contributions to Bitches Brew and now properly documented on On The Corner and other studio work Davis did between '69 and '72. Next, Maupin went on to be a key player in Herbie Hancock's great Mwandishi band and stayed on for Sextant and Head Hunters. Oddly, Maupin was never much of a leader. He made one great record for ECM – The Jewel In The Lotus, just reissued on CD – a couple of so-so things for Mercury and then he disappeared from the recording scene for 20 years.

Like Andrew Hill – in whose company he also performed – Maupin was one of those guys you always hoped would come back while he still had some chops. In the past couple of years, he has. And he hasn't lost a step. If anything, he's more focused than ever, and he sounds great. His new recording, Early Reflections, on Cryptogramophone is exceptional. Maupin has been – among other things – studying composition in Poland, and has grown fascinated by the mountainous Tatra region near Krakow. He has also hooked up with a Polish trio – including a terrific pianist named Michal Tokaj – and an intriguing singer: Hania Chowaniec-Rybka. She has this intense, wordless style that puts me in mind of Mari Boine for some reason. She and Maupin team up for a couple of Tatra-influenced pieces, the second of which had me reaching for Visible World – the ECM recording Jan Garbarek made with Boine in 1996. Maupin revisits "The Jewel In The Lotus" on Early Reflections, re-casting it in three-quarter time and building in a jaw-dropping soprano solo that may be one of the best things I've heard him play. All things considered, that makes Early Reflections a must-have if you've been a Maupin fan, too.

My review of both the reissue of The Jewel In The Lotus and Early Reflections will run in the next issue of Signal To Noise – my debut in that fine publication.
Posted by James Hale at 10:10 PM No comments:

It may be the low U.S. dollar, the ever-growing hassle of air travel, or just the luck of 2008 – whatever the reason, there is a larger-than-usual number of prime jazz acts on the North American festival circuit this summer. Lucky for me and others in my region, most of them are coming to the Ottawa International Jazz Festival (June 20-July 1).

The list of headliners unveiled at this morning's media launch is impressive: Herbie Hancock's Joni Mitchell Project – with Dave Holland and Chris Potter onboard; Brad Mehldau Trio; Return To Forever; Charlie Haden's Quartet West; the LCJO with Wynton Marsalis; Salif Keita; Madeleine Peyroux; EST; and Tim Berne. There's also a wealth of European and Canadian artists, as well as a couple of headline spots to be filled.

Full disclosure: In my role as vice-president of the Jazz Journalists Association, I'm working with the festival to program three days of panel discussions featuring my fellow board members Howard Mandel and Reuben Jackson. On June 24, in conjunction with Hancock's appearance, we'll be looking at the intersection between popular music and improvisation. The next day – joined by some local experts – we'll be conducting a workshop on the state of arts criticism in the digital era. And on June 26 – the day that Return To Forever hits – a bunch of us will be marking the 40th anniversary of fusion and looking at its legacy (another fusion pioneer – bassist Miroslav Vitous – is also at the festival).

You can check it all out at the festival's site.
Posted by James Hale at 1:34 PM No comments:

Well, maybe not quite yet, but the news that Elvis Costello and Elton John will be collaborating on a new television show – Spectacle: Elvis Costello With... – spurs fond memories of Night Music, the last major network show that presented music without forcing it into some kind of odd box.

Costello and John haven't tipped their hands yet about potential guests, but given their cross-genre connections and broad tastes anything is possible. Could we see more highlights like Sonny Rollins backing Leonard Cohen – one of Night Music's most notable moments? One can always dream.
Posted by James Hale at 7:57 AM No comments: