Wasn't That A Man?

There are only three musicians I clearly remember hearing for the first time: Charlie Parker, Robert Johnson and Muddy Waters. 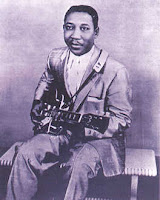 Of these, Waters—who was born 100 years ago today—is my most powerful memory.

My birthday coincides with the end of the school year, and the summer I turned 17 I decided to pool whatever money I got for my birthday and spend it all on records. My purchases to that point were contemporary recordings, so I decided to focus on artists that I'd heard about but had never actually heard.

In 1971, Muddy Waters had all but disappeared from the music scene. In October 1969, he had been severely injured in a car accident, but the '60s had not been kind to his music, despite the influence he had on dominant musicians like Jimi Hendrix, Johnny Winter, Cream and The Rolling Stones, who had taken their name from one of his early songs. Chess Records had been sold to GRT, and Waters' music had virtually disappeared from the marketplace.

That summer I turned 17, GRT released a two-LP set called McKinley Morganfield aka Muddy Waters, which collected Waters' best material from 1948 to 1960. I bought it, brought it home, dropped the needle on "She Moves Me" from July 11, 1951, and the sonic world as I knew it changed completely. The size of the sound, and the raw electricity of Waters' guitar and Walter Jacobs' harmonica was stunning. I didn't know it at the time, of course, but that recording marked the first time that Jacobs had played his harp through an amplifier. In harmonica circles, July 11, 1951 became known as Independence Day, and little wonder: Jacobs' harp creates an otherworldly sound. "Still A Fool," which featured Jacobs on second electric guitar, played through the same amp as Waters, was even darker, throbbing harder, with Waters singing like a man possessed.

As Robert Gordon wrote in Can't Be Satisfied: The Life and Times of Muddy Waters: "Walter's bass notes are like a pulse: you can feel the beat as it approaches, as it rides through you, as it passes. Muddy picks the six strings, raw and visceral, a deep world of hard blues, ominous, horrific, his guitar in unison with his vocal, Walter attuned to Muddy's spatial and aural insights, dirty dancing around him. Moaning and humming reach for what words fail to say. There are four verses with no guitar break, nothing to diminish the onslaught; and slaughter is ultimately this music's subject." 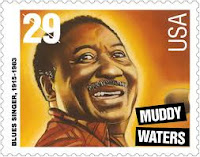 What a way to be introduced to one of the greatest performers of the 20th century.

About 25 years after this discovery I found myself at the Rock and Roll Hall of Fame in Cleveland, standing in front of a display that included Waters' electric guitar. I was transfixed, just thinking about how much what had come out of that instrument had affected my life. I'm not one to get emotional about inanimate objects, but this guitar had literally talked to me over the years. It was a powerful moment.

I only saw Waters live a couple of times, and although the second time I saw him was at a small venue and I was in the radio business by then, the thought of meeting him was beyond my imagination.

It seemed too much like meeting a deity. What could you do before someone who changed the way you heard music so completely, except perhaps to bow.

So, a bow today to you, Mr. Morganfield. Happy 100th birthday.

Posted by James Hale at 1:49 PM No comments: