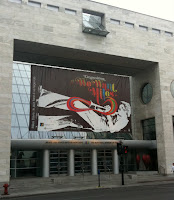 Reflecting the life of a mercurial jazz musician in a static museum exhibit seems like an impossible feat, and it's true that some of We Want Miles: Miles Davis vs. Jazz, an exhibition that runs at Montreal's Museum of Fine Arts until August 29, can feel a little overly staged. If you've spent hours listening to Davis' music, though, the exhibit can also move you in strange ways.

Stare down the length of one of the several Davis trumpets encased in glass and try not to imagine what it takes to breathe life into the instrument and move several generations of listeners to tears. Examine John Coltrane's tenor saxophone in detail and remember what flowed through his lungs and fingers and out of that horn. Or watch Tony Williams suddenly slam his hi-hat in a totally unexpected gesture that, in that instant, makes perfect musical sense and defines his genius.

Music plays throughout the exhibit, and pieces that you've heard hundreds of times take on new hues as you stare at blowups of studio photographs or album artwork. A long segment of the 1960s quintet—with Williams, Wayne Shorter, Herbie Hancock and Ron Carter—shimmers magically on a large, transparent digital screen, and an excerpt from Davis' electrifying show at the 1970 Isle of Wight festival dominates a dark room.

For my taste, there is too little of Davis' humour (don't you just know that the long-rumoured biographical film will be filled with drug use and dark deeds) and not enough from his prime decade spanning Kind Of Blue and Bitches Brew, but there's no denying the reverence and attention paid.

I spent an enjoyable four hours lost inside the exhibit, and left wishing that more, less venerated, artists could have this kind of care taken with their memory.

Here's a video blog entry on the exhibit, including a few words from Davis' youngest son Erin and his nephew Vince Wilburn.

A Fort In The Village 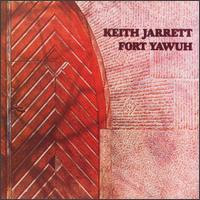 After a busy spring, I’m finally back to my immersion in the music of Keith Jarrett’s so-called American Quartet. It’s proven to be a timely project, given Jarrett’s recent reunion with bassist Charlie Haden.

Fort Yawuh—a live album recorded at the Village Vanguard in February 1973—is where my journey with this band began. While I can’t remember the first time I heard it, I clearly recall listening over and over to the hypnotic “De Drums” on a snowy Saturday morning in early 1975 and hearing a new sonic world open up to be discovered. Until that time, at age 20, my explorations into contemporaneous jazz had consisted of jazz-rock fusion music, and Jarrett’s quartet offered a sublime alternative to the highly amplified spinoffs from Miles Davis’ groundbreaking band. The music was both more lulling and more engaging. Melodically and harmonically, it was much deeper than anything I had heard that had been produced since the mid-‘60s.

I knew Haden from his work with Ornette Coleman (working backward from Davis’ Jack Johnson—my entry point to the jazz of my own generation—I had checked out many of the signal recordings of the ‘50s and ‘60s) but hadn’t heard him in the ‘70s. The depth of his sound was a revelation, and groove was so deep on that 12-minute track that I wanted a piece of whatever mojo they were working.

Interesting that Jarrett would later comment that Haden was reluctant to play vamps in the quartet, because the bassist picks up the simple phrase that the pianist states at the outset of “De Drums,” carries it for several minutes and then, under Redman’s solo, plucks a driving ostinato that defines the piece to such an extent that it’s a surprise it isn’t titled “Da Bass.” Returning to the initial vamp, Haden carries the last minute of the performance. To my ears, this seemed as funky as Muddy Waters’ band in the early ‘50s, yet as musically sophisticated as anything I’d been exposed to.

Today, an examination of Fort Yawuh is not complete without also considering the seven unreleased or unedited pieces that were included on The Impulse Years: 1973-1974, a box that was issued by Universal on the Impulse! imprint in 1997. That set added a 7-plus-minute excerpt of another—more piano-centric—version of “De Drums,” “Angles (Without Edges),” which would appear in a studio version on Treasure Island, a second take of “(If The) Misfits (Wear It)” and three other compositions. At 133 minutes, spread over two discs, it feels like a full two sets of music from the Vanguard.

All of this band’s best characteristics are on display, particularly the ability to balance free playing and rhythm, and the sense of fun the members brought to music that demanded close listening and the ability to respond creatively to a variety of stimuli. Aside from “Melting The Ice,” where Jarrett maintains a firm hand on the tiller with a long, definitive solo, the pieces feel very organic, like anything could happen at any moment. The box set even includes one of Jarrett’s signature audience upbraidings, although it’s a pretty tame one compared to what he’s said more recently.
Posted by James Hale at 3:53 PM 2 comments:

A year ago, Jazz Chronicles was bemoaning the growing list of music festivals that were being slammed by the global recession. It's so great this spring to see that the news is much better. Not only has the ageless George Wein bounced back in the New York City area, but new ventures are sprouting in other cities, too.

In San Francisco, SF JAZZ's Randall Kline has announced that his organization will build a new headquarters and performance space, a move that has already proven to be highly successful in Montreal.

These are the kinds of risk-taking initiatives that are needed, and it's no surprise that they're coming from musical entrepreneurs who have already proven they have what it takes to build audiences with inclusive, forward-looking events.
Posted by James Hale at 12:28 PM No comments: