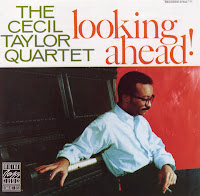 When lists of pivotal discs (those that introduced a vital new voice or important new movement in music) are published, Cecil Taylor's 1958 Looking Ahead! is seldom included. Critics usually point to Conquistador! or later recordings like Unit Structures for proof that Taylor was taking improvised piano in a new direction.

But, Len Lyons, in his 1980 book The 101 Best Jazz Albums was onto something. He knowingly singled out "Of What" as "the most successful track" and identified it as the first obvious example of Taylor's distinctive use of clusters—"groups of notes more dense than chords, which (Taylor) introduces with a sharp, percussive attack." It certainly stands apart among six tracks as the one on which Taylor sounds like a budding iconoclast. Beginning as a duet with bassist Buell Neidlinger, the piece displays Taylor's lithe conception of movement, with sly, upturned asides and rapid, feline pounces. When drummer Dennis Charles joins, he contains himself to hi-hat and the occasional hand fills until the 4:30 mark of the eight-minute performance. Most interesting is a telling moment around 7:00, when Taylor loses the momentum of his attack but keeps the tape rolling. By 7:15 he's back in full swing again. It's a lapse in forward motion that rarely shows itself in his more-developed works, but illustrates a growing confidence with the high-wire act he was still perfecting. By his own admission, this was a time when he still felt bound by both the jazz and classical traditions, so "Of What" shines as a brave experiment. Coming a year before the clarion calls of freedom by Ornette Coleman and John Coltrane, it's impossible not to wonder how this track sounded to listeners at the time.

In his book Miles Ornette Cecil: Jazz Beyond Jazz, Mandel posits that vibraphonist Earl Griffith (notably absent from "Of What") was the co-leader of the quartet, and he certainly sounds it. The 32-year-old New Yorker, who left little trace beyond this recording, carries as much of the lead work as Taylor. He's also the composer of one track, "African Violets," a pretty, restrained piece whose strong Billy Strayhorn aura forms attractive parallelism with Taylor's "Excursion On A Wobbly Rail," his most-obvious bow to Ellington's influence on his early playing.

"Wallering" is a bouquet to Fats Waller, while the A-minor blues "Luyah! The Glorious Step"—despite its archetypal Taylor title—shows continuing allegiance to Monk.

"Toll" bears special notice for its transitional place in Taylor's early evolution. Written for his concert debut at Cooper Union in February 1958, in its first movement it hints at how he would revolutionize the percussive role of the piano, although the effect is somewhat undercut by the unimaginative rhythm accompaniment by Neidlinger and Charles. Its centre section contains a few of those delightful runs where Taylor sweeps you along, but it's the brief third movement—primarily a piano/bass duet—where he illustrates how he can conjure drama with a few deft passages.

Emerging from his chrysalis, Taylor had not quite taken on his final shape, but it was clear from Looking Ahead!—and most particularly "Of What"—that the final product was going to be a thing of beauty.
Posted by James Hale at 2:03 PM 4 comments:

Looking back over recent posts on Jazz Chronicles, I'm shocked to see that it has been a full five months since I introduced my plan to focus on Cecil Taylor's recordings this year. He's been on and off my playlist this summer, but as we move into fall I plan to write frequently here about my process of re-discovery.

This summer was a cruel one for the New England Conservatory (NEC); the Boston-based institution lost two of its stalwart faculty members in George Russell and Joe Maneri. Both were instrumental in making the NEC's Jazz Studies program one of the world's most respected courses of study in improvised music. This fall, the NEC begins a year-long celebration of the program's 40th anniversary.

But it has been the lesser-known faculty members like Maneri and Hankus Netsky (who was named Jazz Studies Chair in 1986) who have influenced dozens of musicians behind the scenes. I've lost track of the number of young players like trumpeter Cuong Vu who have told me that Maneri changed their conception of music and helped shape their careers.

Between October 18 and 24, the NEC will celebrate the achievements of its Jazz Studies program with a series of concerts in Boston. Among those featured are Netsky (October 20), Dominique Eade (October 21), Jerry Bergonzi and Noah Preminger (October 22) and a 40th anniversary all-star band with Brookmeyer, Perez, Perkins, Blake and others (October 23). On the 24th, the Wayne Shorter Quartet (featuring Perez on piano) will perform with the NEC Philharmonia.