One of the attractive selling points of the iconic publication back when it was still a bi-folded newspaper based in San Francisco was that it "spoke to us" by combining contemporary popular music and cultural issues related to many young people and others who were exploring "alternatives."

That made a lot of sense when the non-musical issues were things like the way the FBI was targeting the Black Panther Party through its COINTELPRO program or the way actors like Dennis Hopper and Jack Nicholson were helping to subvert the dominant, conservative culture of Hollywood.

Now-- at least judging by Flip Music, the iPad-friendly music magazine included in Flipboard -- what we've come to is news of the stars of so-called reality TV shows like Real Atlanta Housewives and the obituaries of secondary actors like Leslie Nielsen. It's not like there aren't dozens of gossip publications -- print and digital -- where that kind of "news" can be found. Why put them in a vehicle that is designed to be about music?

Curse you, Jann Wenner.
Posted by James Hale at 9:12 AM 2 comments:

My full Top 10 list for 2010 will be published in the Village Voice again this year—in either the December 29 or January 5 issue—but here's what's in the running (at this point in the order in which I heard them):

So, four have to go. It's a particularly tough choice this year. All of these are quite worthy.
Posted by James Hale at 9:33 AM 2 comments:

It has been at least 25 years since the first time I heard someone opine that virtual concerts would soon supplement—if not actually replace—live music. We all know what's happened since then. Despite promising efforts—Michael Dorf's occasional live webcasts from his Knitting Factory in Lower Manhattan was one notable experiment—live simulcasts have largely been confined to the audio portion of the performances.

Adam Schatz, a 23-year-old promoter who runs a non-profit organization called Search & Restore is helping to change that. Search & Restore has posted a number of concert videos, and on November 29 Schatz is staging a fundraising event that promises to give fans of improvised music around the world a chance to witness some of the genre's leading performers.

Featured in the webcast will be:

And others to be announced.

The webcast can be found here.
Posted by James Hale at 9:23 AM No comments:

Veteran jazz publicist Don Lucoff has just announced the official launch of the Jazz Forward Coalition, a "global and unified voice for jazz." Joining Lucoff in developing the organization have been Michael Ricci, founder/owner of AllAboutJazz.com, Peter Gordon of Thirsty Ear Recordings, Martin Ashby of MCG Jazz, and Jeff Myers of THIS IS RED Agency. Here's the group's news release.

Jazz is as vital as ever, with vibrant local scenes, active educators and thousands of jazz recordings released each year. However, the jazz community lacks a central organization to coordinate and maximize its vast resources, and must take a mainstream new media approach through social and professional networking. The Jazz Forward Coalition (JFC) was formed by a consortium of industry leaders who seek to raise jazz's profile by enhancing its vitality and cultural relevance. The organization's leadership group includes: Peter Gordon (Thirsty Ear Recordings), Michael Ricci (All About Jazz), Marty Ashby (MCG Jazz), Don Lucoff (DL Media) and Jeff Myers (THIS IS RED Agency).

JFC plans to utilize existing and emerging technologies in order to sustain growth and expose jazz to an under-served community. The goals of the organization include creating a central hub for the jazz industry, a global brand for jazz, and a leadership voice for the jazz community. They plan to reach these goals through grants, fundraising efforts, music industry partnerships and with an online presence.

The work of the JFC will be focused on four levels: connectivity via a business-to-business website; a global voice that speaks both within the community and outside; a knowledge base library of tools bringing marketplace solutions to its membership base; and strategic partnerships to help with mainstream market penetration and economic viability.

JFC will create an interactive website that will allow jazz professionals to network, publish and exchange information and access marketplace tools. An online newsletter, "Business of Jazz," has already been developed to keep jazz professionals up-to-date on industry news and trends.

Posted by James Hale at 5:10 PM No comments:

Thirty-two-year-old nostalgia rules my brain this week, in anticipation of Saturday's reunion for alumni of CKCU-FM and the blast of publicity surrounding next week's release of Bruce Springsteen's re-packaging of one of my seminal albums, Darkness On The Edge Of Town. 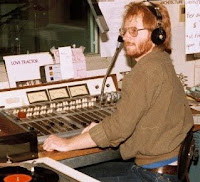 The fall of 1978 was a turning point for me. Out of school for a year, I'd put in nine months of work at a small arts magazine, learning the magazine business from the ground up, and had landed my first serious job in journalism (as dedicated as I was to the arts magazine, it was hard to view those nine months as anything more than a paid apprenticeship). At the end of the summer I got a chance to attend the reunion of The Allman Brothers Band in Macon, Georgia, which inspired what I considered my first substantial piece of music writing, and led to me selling a small article to Rolling Stone. In the fall, I began volunteering at CKCU-FM—landing several on-air shows that dominated my life for the next several years. This was heady stuff; it seemed that it might actually be possible to make some kind of living in arts journalism.

But, enough about me. What really has my thoughts occupied is how radio seems to have failed to keep pace with developments in jazz.

A casual look at the state of jazz in the late '70s/early '80s makes it appear that it was a relatively fallow time. Fusion had burned out and simultaneously turned in on itself and outward toward smooth jazz. The young Marsalis brothers were about to move out of Art Blakey's Jazz Messengers and launch the neo-conservative movement that would dominate the music for 20 years.

That much was true, but bubbling beneath the surface was a tremendous amount of great—albeit non-commercial—music by people like Henry Threadgill (as the leader of the trio Air), Arthur Blythe, David Murray, James Blood Ulmer and Ronald Shannon Jackson. What's more, exciting new bands like the Lounge Lizards and The Contortions were using elements of improvised music, and artists like Neneh Cherry were bursting out with dance hits that melded easily into playlists alongside Ornette Coleman and Miles Davis.

At CKCU and other radio stations these sounds were swept up and intermingled with smart pop bands like The Jam, Public Image Ltd., and DEVO.

Is that same thing happening today with artists like Vijay Iyer, Jason Moran, Steve Coleman and Mary Halvorson? If it is, I'm not hearing it.

I'm trying not to let my 30-plus years of distance affect my thinking, and simultaneously hoping there's some young broadcaster out there who is mixing from Iyer into MIA, or from Lil' Wayne into Moran.