Great Pianist, Not So Great Personality

Given the fact that his death was announced at mid-day on Christmas Eve and quickly overshadowed by news of the assassination of Benazir Bhutto, it's possible that Oscar Peterson didn't get the coverage that might otherwise have been his due. Here in Canada, the accolades went on for hours on the Canadian Broadcasting Corporation. Again, hard to judge what might've been the case had it not been the day before Christmas. I was surprised to see that an obituary I wrote so many years ago that I don't even have a digital copy of it was given extensive play in one of our national newspapers. Again, luck of the draw when most people have already headed home for the holidays.

In the obit I alluded to Peterson's tetchy personality, and his demands to be treated like a celebrity. Ironically, a number of other tributes noted that Peterson was a gentle giant from Montreal who was reluctant to move onto the world stage when impresario Norman Granz came calling in the late '40s. If Oscar was humble then, he sure learned how to be a royal pain later in life. He was too much the gentleman -- and too much in control of his public persona -- to ever insult an entire nation, but I'm sure he could've taught Keith Jarrett a thing or two about being a prima donna.

The stories of Peterson's demands for the star treatment are legendary -- there are at least three instances concerning promotions here in Ottawa (one of which drove a local company into bankruptcy) so one can only assume that he left damage like that in other places, too. My own experience dates to my years as a board member with the Ottawa International Jazz Festival. In my time there we booked some big names, including Ornette Coleman, Wynton Marsalis and Sonny Rollins, but Peterson was the only one who demanded a limousine be put at his disposal for the entire time he was in town. We ran on a ridiculously small budget, so that put a major dent in our finances. The fact that the limo caught fire while ferrying Peterson the short distance between his hotel and the concert venue is one of those stories that keep those of us who were involved with the event laughing.

For an artist who was lauded loudly in the press through six decades, Peterson was curmudgeonly when it came to jazz journalists. The last time that the International Association of Jazz Education held its annual conference in Toronto Peterson excoriated critics -- who make up a sizeable portion of the conference's attendees -- during a keynote address. Nice guy!

I couldn't help but laugh when I saw the juxtaposition in my obituary between a typically sour quote by Miles Davis about Peterson's ability to improvise and a Peterson quote saying that he didn't take criticism to heart because it never came from a fellow musician. I wish I could remember if I set that up, or if an editor did that, but I like to think it's payback for that limo ride.
Posted by James Hale at 2:08 PM No comments: 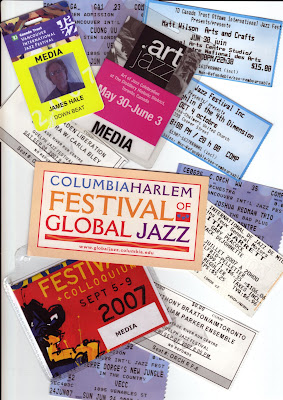 Since my concert calendar is clear for the remainder of 2007, I suppose it’s safe to select my top half-dozen live performances of the year (that’s barring the possibility that Sly Stone accepts my invitation to pop in and do a few songs at our New Year’s party).

Trio M: Guelph Jazz Festival – Three of my favourite musicians – Myra Melford, Mark Dresser and Matt Wilson – in a new band with a brand new book of compositions. What could go wrong? Well, you never know with a concert scheduled for mid-afternoon on a Saturday, but this one was stunning from the first to last notes. Her quicksilver phrasing and pointillistic technique make many people forget Melford’s background in stride piano and the blues, but this concert kept cycling back through language written in the ’20s and ‘30s, then springing forward to timeless improvisation. Wilson and Dresser are also masters of the signature statement: Wilson’s incredible cymbal dynamics, and Dresser’s unexpected ‘chords of doom.’ It’s a cliché now to use the metaphor of conversation for a jazz performance, but it was really apt for this show, with each musician possessing a distinctive accent yet sharing a familiar language. There was laughter and episodes of sustained tension; in short, a performance of the highest order.

Sten Sandell Trio with John Butcher: Vancouver International Jazz Festival – My notes for this show include a line that I decided was too cute by half to include in my DownBeat review: “You know a show is great when even the drum solo is memorable.” I write down all sorts of non-sequiturs when I’m reviewing a show, but my notes for this are pretty sparse; I was engrossed. This was the first time I’d seen Butcher live, and I was really floored by his technique, which is on a par with Evan Parker’s. He has the ability to sculpt phrases that shift from pure notes to micro-tonality. The show was one seamless piece, and for long periods drummer Paal Nilssen-Love was silent. At the end, he exploded into a solo that was one loud roar of noise. A perfect conclusion.

Kenny Wheeler All-Star Tribute: Art of Jazz, Toronto – The chemistry between Kenny Wheeler and bassist Dave Holland is always delightful, and with the piquant solo voice of Lee Konitz and vocalist Norma Winstone’s inventions added to that this was a sure-fire winner. The band pushed Wheeler to play outside his blurry, romantic comfort zone, and the program covered a wide range of his compositions.

John McLaughlin & the Fourth Dimension: Dominion-Chalmers United Church, Ottawa – I somehow missed the Mahavishnu Orchestra’s only appearance in Ottawa in 1972 and never thought I’d hear McLaughlin play with the volume and intensity that marked that band. Fronting an energetic trio that had chops to burn, McLaughlin was clearly enjoying himself, and playing with tremendous abandon.

The Bad Plus: Vancouver International Jazz Festival – An exceptionally clean sound mix in a big soft-seat theatre seems to be just what the trio needs to make every element of their sound pop out. A terrific version of Ornette Coleman’s “Song X.”

Carla Bley Orchestra: Art of Jazz, Toronto – A terrible outdoor venue, sound problems and a band that seldom plays together (albeit one stuffed with a lot of Toronto’s best players), and Bley’s book of compositions still sounds great.
Posted by James Hale at 4:38 PM 1 comment:

We've started posting members' top 10 lists at the Jazz Journalists Association site. It may be too early to detect a clear winner, but among the front runners at this early stage are: the Charles Mingus at Cornell concert with Eric Dolphy, Michael Brecker's Pilgrimage, Maria Schneider Sky Blue and the live recording by Hank Jones & Joe Lovano — one that somehow escaped my notice.

Only 14 lists posted so far, so many more to come. Keep an eye on it, especially if you have gift shopping to do.
Posted by James Hale at 2:09 PM No comments: 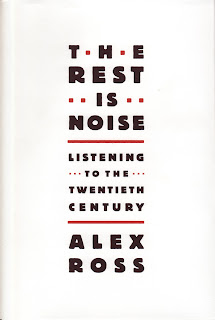 About four years ago I started casting about for a university course or program that could fill in the (many) gaps in my knowledge about 20th-century music outside my roots in American blues and jazz. As the lines continue to blur between improvised music and contemporary classical music — especially as it relates to electronic music — I find myself wanting to know more about the evolution of these things outside the well-known "great men."

I never found a course within commuting distance or online, but with Alex Ross' new book, The Rest Is Noise: Listening To The Twentieth Century, I'm feeling that my search may be over. Ross is such an engaging writer, and his research so compelling, that I feel it could provide enough jumping-off points to recordings and other reading that it will keep me busy for years.

Ross' book also provides a great bedside companion to the just-released new book by my colleague and friend Howard Mandel, Miles, Ornette, Cecil: Jazz Beyond Jazz. The connection between those three giants of improvised music and Stravinsky, Debussy, Stockhausen and others is well known, but how did all these composer-performers help shape and reflect what we have come to know as the avant-garde?

Lots of great reading, thinking, and more listening to come.
Posted by James Hale at 10:48 AM 2 comments: