Band Of Gypsys: Coming 'Round Again

The Jimi Hendrix estate folks announced today that their next series of releases through Sony Legacy will include a reissue of the Band Of Gypsys video documentary that was originally released in 1999. At that time, I published this critical look at the film, Hendrix's performances spanning 1969/70 at the Fillmore East, and the enduring mysteries surrounding the dissolution of his only all-black band. 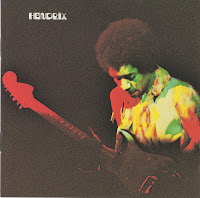 For your entertainment, here 'tis:

The passage of 30 years and the mellowing effects of nostalgia have coated the rock music of the late ‘60s in a patina of recreational drug use and outrageous clothes. For many, time has erased the reality that rock was closely linked to the political and social upheaval of the day.

No one was more of a lightning rod for change than guitarist-singer Jimi Hendrix. Already worshipped by millions of white fans when his sardonic performance of “The Star-Spangled Banner” closed the Woodstock festival in August 1969, Hendrix became a hero to fellow blacks through a series of events in the year before his death Sept. 18, 1970.

Those events, culminating in four New Year’s concerts at the Fillmore East auditorium in New York City, are the subject of a new video (Band Of Gypsys) and double-CD set (Live At The Fillmore East) released by the Hendrix Estate and Universal Music Group.

The summer of ’69 found Hendrix at a musical crossroads. Bored with the role of psychedelic ranger he had ridden to stardom and under increasing legal pressure on a number of fronts, Hendrix was looking for a new direction.

The most pressing legal problem was his need to record an album to fulfill a contractual agreement that pre-dated the formation of the Jimi Hendrix Experience in 1966. A more personal concern was his desire to reach out to the black community, which had largely ignored the spacey sounds of the Experience, its all-white rhythm section and British roots.

A new trio — the all-black Band Of Gypsys — and the recording of four sets at the Fillmore East on the cusp of the new decade were the result.

Billy Cox, Hendrix’s bandmate from the days when both were members of the 101st Airborne Division, replaced Experience bassist Noel Redding. A fluid yet rhythmically solid player, Cox was adept at feeding Hendrix melody lines that fuelled his high-flown improvisations. Buddy Miles, a heavy-hitting drummer who had played with Wilson Pickett and the Electric Flag, was recruited to fill in for Mitch Mitchell.

Miles was the antithesis of Mitchell’s flowing, multi-dimensional style, and brought a funky bonhomie to the group.

Six songs from the Fillmore concerts, including a version of “Machine Gun” that many music critics consider the highlight of Hendrix’s career, were released in April 1970 — fulfilling the contractual agreement with Capitol Records — and another three were included in a compilation in 1986.

Live At The Fillmore East presents 14 previously unheard performances from those concerts. None of this new material approaches the apotheosis of the original “Machine Gun”, though there are several pieces that can stand alongside most live Hendrix recordings.

“Stone Free”, one of the few Experience numbers included at the Fillmore, shows Hendrix’s masterful ability to shape feedback, and includes some inspired rhythm playing during the coda. “Hear My Train A-Coming” is rendered as a blues march with Hendrix soloing passionately, and two alternate versions of “Machine Gun” contain highlights, although neither has the sustained tension and drama of the original.

But the four sets make Miles’ technical shortcomings obvious, and it’s evident that the band hadn’t fully learned the material. There are blown lyrics and sloppy transitions, and Hendrix apologizes after a particularly messy version of “Stepping Stone”.

That was the only weak number in the first set of the New Year’s Day show, which also produced the ground-breaking “Machine Gun”, an aggressive version of “Power Of Soul”, and an effective soul song called “Stop”. As well as forming the bulk of the material on the original Band Of Gypsys album, that set was videotaped in black-and-white, and is the centerpiece of the 83-minute home video of the event.

The video stresses the historical perspective, examining the social importance of Hendrix’s shift to an all-black band through interviews with influential black disc jockey Frankie Crocker, musicians Miles, Cox, Lenny Kravitz and Vernon Reid, engineer Eddie Kramer and a dozen others. Along with six songs from the Fillmore, Hendrix is shown performing on BBC-TV, “The Dick Cavett Show” and at Woodstock.

Appropriately, the film pivots on the epochal performance of “Machine Gun”, which is shown almost in its entirety. Dedicated to “all the soldiers fighting in Vietnam” and, pointedly, to the members of National Guard called out to quell rioting in America’s black ghettoes, the song is an angry torrent of sound that flows from Hendrix’s guitar with a seamless inventiveness that rivals solos by jazz musicians like John Coltrane or Miles Davis. Indeed, film of Davis performing at the 1970 Isle Of Wight Festival is used to underscore how Hendrix influenced the jazz trumpeter’s shift to electric music.

Kravitz, Reid and several others provide insights into how Band Of Gypsys increased Hendrix’s influence on young blacks. Kravitz recalls how Hendrix’s appearance on the Cavett program in a bright turquoise robe and Afro haircut was revolutionary for TV in the 1960s. In fact, there is little that symbolizes the cultural schism of that era more succinctly than the sight of the ultra-cool Hendrix positioned between the tweedy Cavett and actor Robert Young of “Father Knows Best” and “Marcus Welby MD” fame.

The video speculates that the Band Of Gypsys did not sit well with Hendrix’s management or record label, which apparently feared erosion in his white fan base. The evidence is inconclusive.

True or not, the trio was short-lived. Within a month, Mitchell was back on drums and the music made as Hendrix’s last year began became little more than a footnote to a brief, brilliant career.

Now, at last, more of those legendary sessions by the Band Of Gypsys are available as a reminder of how much music mattered in this century’s most turbulent decade.