Maybe it's human nature, but there's always a certain temptation to make things appear harder to do than they are, all in pursuit of the ultimate compliment: Wow! That's probably harder than it looks.

Sometimes, you just get lucky.

A case in point: recent family events put me somewhat behind schedule in completing an assignment for CBCMusic.ca on the development of Blue Note Records as one of the most recognized brands in popular culture. Two days before deadline, I had only one source lined up—former Blue Note artist Javon Jackson—and that was something of a 'gimme' since we're friends. I'd also promised my editor someone who could talk knowledgeably about what it takes to build and maintain a global brand and someone from inside Blue Note who could comment on how they manage the heritage that founders Alfred Lion and Francis Wolff developed between 1939 and the mid-'60s.

The first break was probably just timing: Blue Note president Don Was had an opening in his crazy schedule (you know, The Rolling Stones didn't need him in the studio that day, or something). Don was incredibly gracious and generous with his time, and gave me a great quote about how he manages Blue Note: "I just try not to make any shitty recordings."

It's tough to go wrong with a quote like that, and to make things even easier, Don repeated a story he had recounted to the New York Times about how he constantly refers to Lion's original mission statement for Blue Note.

The second break was more astounding. Here in Canada, advertising veteran Terry O'Reilly has become well known outside his industry with his extremely witty and insightful radio program Under The Influence. He's another busy guy, so I was very happy when he made himself available to respond to some email questions. Very nice, but what were the odds that he would know much about Blue Note Records? Turns out, he had not only done a lot of thinking about Blue Note and its brand, but he actually worked with legendary Blue Note designer Reid Miles back in the '80s. He had a ton of interesting things to say.

When you get good stuff like that, an article almost writes itself. You just have to make it look hard.

Check out the article here.
Posted by James Hale at 11:03 PM 1 comment:

An Ode To A Man With Huge Ears

My father died two weeks ago at the age of 90.

He had a good life—charmed, actually, in many ways—and he was lucky to slide away from us without much suffering.

He left me with many, many things, as a good man who fathers you for 58 years will do, and the best of all things was his curiosity about music. 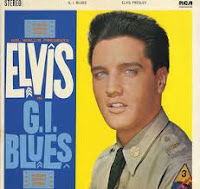 Here's what a typical Sunday morning sounded like at my house in the 1960s: I'd be awakened by the music of Glenn Miller, Duke Ellington, Benny Goodman, The Kingston Trio, Elvis Presley, or some faceless Hawaiian music. My father bought one of those massive, coffin-like stereo systems in about 1961, but he was smart enough to go with a Grundig system with really decent sound. That system, and the record club phenomenon of the time, led to him consuming an endless amount of LPs. My brothers were off to college, and they had left behind LPs by Gene Vincent, Elvis, Santo & Johnny, and all those groups that came along during the folk music explosion.

My dad didn't discriminate; he'd roll straight from GI Blues to a stereo demonstration record featuring Bob & Ray, to Goodman featuring Charlie Christian, to the soundtrack from South Pacific. Sundays streamed by, usually ending only when golf came on TV late in the afternoon. 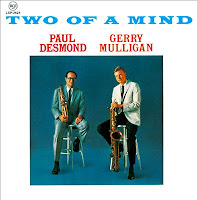 One album my father had changed my life. It was called Two Of A Mind—a 1962 session featuring Gerry Mulligan and Paul Desmond. As noted, he listened to a lot of big band music, or by Goodman's small sub-groups, but the Mulligan/Desmond LP was the first thing I heard him play that captured a contemporary sound. It was also one of the few records he played that I went back and checked out myself. From there, it wasn't a big step to a Charlie Parker collection that a sax-playing friend of mine brought over one day after school. The rest, as they say, is history.

Perhaps the best thing about the way my father exposed me to music were the stories he told me about the musicians. He loved to tell stories, and the music provided a great backdrop to his tales of Frank Sinatra's early years, or Goodman's efforts to convince his parents that a jazz career was a worthy goal. He might've scoffed at Elvis' hair, but he never put down his music.

In effect, he taught me what I needed to know when I landed a job hosting a show on a campus FM station in the late 1970s.

Let's not gloss things over; he disagreed with a lot of the things I listened to when I was in my teens. He told me to turn down The Allman Brothers Band more than once, and said that Muddy Waters sounded like he had a headache, and was giving him one, too. He once asked me what I thought hours of listening to music was going to do for me, but he balanced that years later by showing real pride in the career I built for myself as a music journalist.

One of the best things about my father's long life was that I had a chance to share a lot of music with him when I was an adult. I particularly recall taking him to see his hero, Goodman, at one of the clarinetist's later concerts. I don't think I can remember my father having as good a time outside of family gatherings. Very recently, when he was really in failing health, he was still interested and alert enough to enjoy some first-hand stories about Goodman I learned from one of his sidemen.

I wish I could say that I've been as influential on my own two daughters' musical education. Sadly, that's one of the things that fathers have lost control of, thanks to the advent of cheap personal listening devices. Back in the 1960s, you could do a lot worse than waking to Ellington, and having the stereo controlled by someone with as much curiosity and wisdom as my father.
Posted by James Hale at 9:14 PM 2 comments:

In Ottawa's Hintonburg, Worlds Collide and Stomachs Win Over Ears

Aside from jazz, one of my favourite interests is cities and how they develop, and no city attracts my interest more than my own.

I grew up just to the west of a working-class neighbourhood in Ottawa, which was known variously as Mechanicsville and Hintonburg. In recent years, the area has been undergoing sweeping change, with small, contemporary restaurants replacing decades-old KFC outlets and independent greasy spoons. Consequently, the area has attracted a growing number of young families, artists and technology workers, who have taken over the densely packed houses that straddle the main artery. For those of us who grew up in the years when the neighbourhood was anything but a destination, the change has been heady.

One of the cornerstones of the neighbourhood's change has been the Elmdale House Tavern, one of the last of the city's traditional beer parlours (which, as recently as the 1970s, featured 'Men's' and 'Ladies and Escorts' entrances and strictly segregated service policies). A few years ago, a couple of neighbourhood veterans bought the 80-year-old business, replaced the heating/cooling system and other infrastructural elements, and launched a six-night-a-week live music policy—the first of its kind in Ottawa in many years. While the booking policy only occasionally extended to include jazz artists like Charlie Hunter, the musical menu was eclectic, and the opportunities for young bands legion.

Meanwhile, across town, in another once-dodgy neighbourhood, another dedicated, young entrepreneur was shaking things up with a funky restaurant that offered sustainably sourced seafood and employed some of the city's most creative chefs. But, while the Elmdale House maintained the down-and-dirty essence of its roots, and kept prices low to build its audience, the Whalesbone Oyster House offered main courses that scrape the $50 mark and attracted high-flying Cabinet ministers from Canada's federal government.

Now, Ottawa's music and food scenes are abuzz with news that Whalesbone owner Joshua Bishop has purchased the rights to the Elmdale House business and announced plans to reduce the live music by 60 percent, cut the seating capacity from 160 to 95, and add a kitchen to the old structure.

I'm a fan of Whalesbone and its sustainable fish, but I'm mourning the loss of this important music venue. Ottawa has always had a problem with sustaining a full-time music scene—being sandwiched  between the much-larger scenes in Montreal to the east and Toronto to the west—and the Elmdale House was going a long way toward turning that around.

In this case, it's clear that the foodies have won out and musicians and their fans are on the losing end.