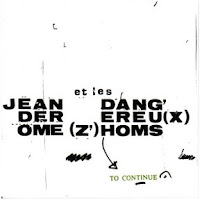 As a Canadian writing about jazz for U.S.-based publications I often get asked what the "scene" is like here, and who is making interesting music (in fact, there is an entire column of reviews of new Canadian CDs by me in the current issue of DownBeat). It's difficult to describe the scene without talking about Canada's defining "two solitudes," and at that point I usually see my American friends' eyes glazing over. But how else can you explain why Jean Derome, and in particular his quintet Les Dangereux Zhoms, are not known throughout Canada as the best band in the land? Their new CD To Continue is their first new recording in a decade, and it reminds me what a terrific group this is. Aside from Derome's expressive writing and playing — primarily on alto here — the band has the great Tom Walsh on trombone and Pierre Tanguay, who I think is one of the most exciting drummers in the music anywhere.

Perhaps the best thing about Derome's music, though, is that it is part of the tradition, yet distinct from music that would have been made anywhere but in Quebec. It is hard to pinpoint the distinctive regional features — it is in Derome's humour, in his fascination with language, and in a certain outsider's perspective that shines through.

If there was one recording that I'd want American listeners to hear so they might reach a better understanding of the diversity of improvised music here, this might be it.
Posted by James Hale at 2:45 PM

James, I agree with your props for Jean and all he does.

Just the other night I watched a DVD of Jean, Pierre and Normand Guilbault. It was beautiful music, played in a distinctly Quebec fashion (Even though they were playing many compositions by Dolphy and other Americans)

However, I do lament the fact that one of Quebec other top talents, Rene Lussier and Jean no longer make music together.

I look forward to checking out your Canadian CD column in the new Downbeat.

More like three or four solitudes to my way of thinking. For years I've lamented the fact that Bill King's "National Jazz Awards" consists almost entirely of players you could hit with a rock from the roof of the Royal York Hotel.

That Vancouver players are not represented at these things is perhaps excusable, considering the arduous stagecoach trip across plain and mountain, but Montreal is just up the road a piece from the Exact Center of the Known Universe (AKA Toronto Ont.).

I agree with your comments about the NJAs and said as much in a piece in CODA last May (issue 333). I spoke to a couple of people in the Alberta scene who also voiced "What about us" sentiment.

It will be interesting to see if the nomination process is altered this year, otherwise the awards will have just about lost all credibility.