I was unabashedly obsessed with The Allman Brothers Band throughout the 1970s, from the first time I borrowed their debut album from my friend Myles and dropped the needle on the lacerating medley of "Don't Want You No More" and "It's Not My Cross To Bear." I was devastated when guitarist Duane Allman died on his Harley-Davidson at the age of 24, just as he was realizing his dream of breaking through to the mainstream with a band that synthesized rock, blues and improvisation with a definite Southern accent.

I dabbled in later versions of the band, but as much for social reasons (all of my close friends were Allman freaks, too) as musical ones. Perhaps because I was never lucky enough to see the original band in person, I have never been a camp follower for any of the later versions. I caught a weird hybrid of the band in 1978, when they reunited in Macon, Georgia, after several years of acrimonious separation (in fact, I was the only person in the tiny audience to tape the show—the tape resides in the band's archives) and one of their 25th anniversary shows in 1994, when original guitarist Dickey Betts was still in the band. The only time I've seen the modern lineup—with dual guitarists Warren Haynes and Derek Trucks—was the only time the band has played my hometown. 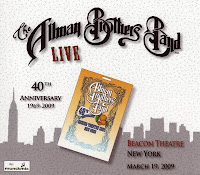 Given that context, I've been delighted with my purchase of a triple-CD set from the band's annual run of shows at the Beacon Theatre on New York City's Upper West Side last March. While the band has always been respectful of Duane Allman's memory to the point where his name has seldom been uttered onstage, during this 40th-anniversary tour the band made a point of paying tribute to him. The shows opened with an electric version of "Little Martha"—the only song in the band's extensive catalogue that is solely credited to him—and his image was prominent. During the stand at the Beacon this year, a number of musicians associated with the band were invited to sit in. While, reportedly, there were memorable highlights from the likes of Buddy Guy, the only show I really wanted to hear was from March 19, the night Eric Clapton came to play.

Clapton plays a special role in Duane Allman's short career, because—despite Allman's prolific period as a session musician—Clapton's album Layla is his best, and highest-profile platform outside his own band.

Following 11 songs by the Allmans themselves, Clapton joins the group (and Trucks' wife, blues guitarist Susan Tedeschi, for one track) for five songs from Layla and a version of "Dreams." As great as that is—and it is—what really has me stoked about listening to this recording again and again is the sound of Gregg Allman's voice. Next to Keith Richards, Gregg Allman is perhaps the most infamous drug abuser/survivor from the 1960s, and his voice is one of the finest in the blues. At his best, the man can break your heart with a simple phrase. Sadly, for too much of his career this amazing voice has been damaged by his chemical dependencies. Not here, not now. On this set from the Beacon he sounds better than at any time in his career. Not only has his voice taken on more of an edge (imagine that!) but it's more powerful, and his diction is crystal clear.

I won't even bother going into how good the rest of the band sounds; at this point in their career, that's a given. Trucks is an astounding, inspiring musician, who moves me when I hear him because he shows what Duane Allman might have grown to become had he not taken that fateful bike ride and been snuffed out when he was barely grown.
Posted by James Hale at 6:00 PM