I always look forward to the opportunity to hear my friend, drummer Jerry Granelli, play live. Not only is he one of the most creative percussionists of the past 50 years, but he radiates a sense of playfulness about music that is infectious. 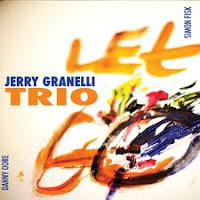 Last night, Jerry brought his new trio to Ottawa as part of a national tour in support of his CD Let Go. As he described it, this is a trio he has been not dying to put together. "I've known Danny (Oore) and Simon (Fisk) since they were kids, and just hoping I lived long enough to get to play with them."

As usual, Jerry has a great ear for talent. After leaving Halifax, Fisk was a mainstay for awhile in Vancouver, and then moved to Calgary, and the two have made music together as part of the bassist's own trio. Oore studied with the gifted teacher Don Palmer at Dalhousie University, and has grown into an extraordinary reed player. I last heard him when he was still a student, and his development has been exceptional. Based on what I heard last night, I'd rank him with just about any young saxophonist in improvised music.

The best part of last night's show, however, was the way the trio embodied the album's title. Jerry noted a couple of times that what was being played onstage bore little resemblance to what they did in the studio, and that's just fine with him. He encourages freedom, and both Fisk and Oore take full advantage. In that respect, Jerry always reminds me of something his friend, fellow drummer Joey Baron—he of the eternal goofy smile while playing—once told me. "We take this music very seriously, but we have fun doing it."

At one point, Oore, playing soprano, deconstructed a solo into a line of staccato honks and bleeps. Smiling from behind his drums, Jerry commented, "Let's see you get out of this." Oore responded by deftly navigating the blind alley, and the band was off on another adventure.

Serious fun, for sure.
Posted by James Hale at 9:31 PM