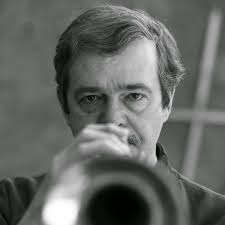 First, an embarrassing admission: I didn't know trumpeter/composer Kenny Wheeler was a fellow Canadian until about 1979. In my naiveté, it never entered my mind that one of my countrymen would be leading quietly spectacular albums like Gnu High on ECM Records with sidemen like Keith Jarrett, Dave Holland, and Jack DeJohnette.

In my defence, Wheeler had left his native Canada before I was born, fleeing the possibility that he would end up teaching high school. While Wheeler had the self-effacing, shy manner of a math or science teacher, he had a restless spirit and a desire to put himself in challenging situations that he never could really explain.

Why else would a quiet man find himself mixing it up on London's burgeoning jazz scene in the 1960s with woolly, fearless improvisers like saxophonist Evan Parker and drummer John Stevens? When I first interviewed Wheeler in 1997 (for my first feature article for DownBeat) he addressed my curiosity about what drew him to that situation.

"I find playing free with people I like very therapeutic. I feel much better afterward (although) I would find it hard to say whether what we played was good or bad. I just knew that I'd gotten something out of my system."

That quote captures Wheeler's personality, but it doesn't begin to tell you what Wheeler sounded like when he put his trumpet—or, increasingly in later years, flugelhorn—to his lips. It was an extraordinarily human tone, one that cracked with longing or sorrow, and a lyrical line that was full of sudden leaps and turns, intervals that broke your heart and shone a light on the proud, melancholy man who held the horn.

Being Canadian, I had the opportunity many times over the years to see him play in person, and the great honour to talk with him on a number of those occasions. During our last conversation—in an alcove off the lobby of an Ottawa hotel—it was clear that his health was fragile; he was slow moving and stooped. As we parted, I mentioned to him a dream that my late friend, writer Eric Nisenson, and I used to pass back and forth: Wouldn't it be great to hear Wheeler play with Sonny Rollins? A few years after we dreamt up this ideal match, Eric found himself writing a book about Rollins. He asked the saxophonist if he knew Wheeler's music, and Rollins agreed that it would be an interesting combination. I mentioned this to Wheeler as we made our good-byes. He smiled one of his rare smiles, shook his head a bit, chuckled to himself, and said: "That would be something."

In memory of the great Kenny Wheeler, certainly one of the finest Canadian artists in our history, here is my original article from August 1997:

Author A.A. Milne based his classic children's tale, Winnie-The-Pooh, on a Canadian brown bear that had journeyed to England with a World War I solder. Had Milne written his book a generation later—when trumpeter Kenny Wheeler, another transplanted Canadian, arrived in England in 1952—Wheeler could have been the inspiration for the charmingly gloomy character Eeyore.

Like the pin-tailed storybook donkey, the 67-year-old Wheeler has a tendency to be hard on himself, expect the worst and be slightly suspicious when things turn out better than hoped. And who's to say he has the wrong outlook? Despite developing a distinctive trumpet voice on more than a dozen recordings of his own and about 60 others, festival promoters are reluctant to book him without all-star bandmates like Dave Holland or Jack DeJohnette.

"I don't know why, but the (North American) festivals have never been interested in me," Wheeler says on a trans-Atlantic phone call. "I think some of them feel that I'm not far-out enough, and others feel I'm too far-out. It used to make me angry, but it doesn't bother me anymore. Still, I regret not being able to do what I want."

What he'd like to do is tour more extensively with his quartet of pianist John Taylor, bassist Chris Lawrence and drummer Adam Nussbaum, or make an album with fellow Canadians Paul Bley and Sonny Greenwich, or write more big-band music. The latter is a pursuit he particularly misses.

"I had a nice period around 1990 when I had quite a long British tour paid for by the British Arts Council. The album Music For Large & Small Ensembles came out of that. That was very successful, and I thought after that there would be quite a lot of call for what I do, but there wasn't any. Times change. I mean, I never was in fashion, but I'm certainly not now. I have the itch again to write some big-band music, even if nobody wants it. It'll always be there if somebody else wants it."

Fellow trumpeter Dave Douglas, who recently worked with Wheeler in England, believes there should be no shortage of takers. "Kenny's compositions are jazz standards; I learned them at music school. When you're studying the music, Kenny Wheeler's tunes are one giant area where you need to focus. They're unique in jazz composing—the different ways of having the chords move, different types of chords, always really interesting phrase lengths; odd phrase lengths, but somehow with melodies that make them work."

Saxophonist Rob Frayne, another musician in his 30s who has studied Wheeler's music and worked alongside him, adds: "He uses thick, heavily weighted chords, and shares the transparent voicing ability that Gil Evans had for thinning out a thick chord. It's almost romantic music in that there are these beautiful melodies, but there's always a bit of variation, and they always tell a story."

Characteristically, Wheeler modestly dodges the compliments. "If anything, my composing has gotten simpler. To me, it sounds quite simple and melodic."

He doesn't mind the romantic tag, though.

"I try to write my idea of a nice, slightly melancholic melody. A lot of the old standards were very sad, but when I hear them now it makes me feel quite happy and good. You take sad sounds like Billie Holiday or Miles—they had kind of a melancholic way about them, but I loved it very much."

Wheeler may be wary of life's disappointments, but he has never been afraid to follow his instincts. At 22, he suddenly changed his mind about becoming a high school teacher and booked passage on a ship bound for England. The vague idea—planted in his mind by a boyhood friend and future DownBeat editor, Gene Lees—that there were English bands needing trumpet players seemed more appealing than enrolment in Montreal's McGill University.

What bands there were mostly ignored him, and he wound up finding work at the post office. After two years and marriage to an English woman, he began getting gigs with Tommy Whittle, Joe Temperley and, eventually, John Dankworth.

The six-year relationship with Dankworth was a seminal one, with Wheeler using the alto player's band to develop his writing and arranging style. In 1968, Dankworth appeared, along with Dave Holland, John McLaughlin, Tony Coe and others on Windmill Tilter, which showcased Wheeler's compositions and helped to establish him as a highly individualistic writer.

As a trumpeter, however, Wheeler was frustrated. The solo opportunities in Dankworth's band were slim, and there was a new air of improvisatory freedom blowing in from Europe. At London's Little Theatre Club, players like John Stevens and Evan Parker were experimenting with free music, and the open format gave Wheeler something intangible he was missing. "I find playing free with people I like very therapeutic. I feel much better afterward, (although) I would find it hard to say whether what we played was good or bad. I just knew that I'd gotten something out of my system."

In addition to work with Stevens' Spontaneous Music Ensemble, Mike Gibbs' orchestra and drummer Tony Oxley's sextet, Wheeler formed his own band. "In 1969 and '70 my idea was to have a group of musicians I liked, no matter what area of jazz they came from. I had some straightahead players, some dixieland guys and a few free players all mixed up. I loved the sound of that band."

The push and pull of free music and tightly structured compositions have marked his career ever since. He has balanced the abstractions of the Globe Unity Orchestra and Anthony Braxton with the cut-glass creations of Azimuth (which he co-leads with pianist John Taylor and vocalist Norma Winstone) and a wide variety of studio work.

Still, it wasn't until the mid-'70s release of the star-packed Gnu High and Deer Wan on ECM that Wheeler's music became widely known in North America. Sidemen the caliber of Keith Jarrett, DeJohnette and Holland were the perfect vehicles for Wheeler's texturally rich writing, and producer Manfred Eicher's crystalline sound showcased his lyrical, wistful playing. Wheeler seems at home on the label, which has subsequently released six more recordings, including this year's gorgeously austere Angel Song with Lee Konitz, Bill Frisell and Holland.


As proud as he is of Angel Song, Wheeler remains highly critical of his own playing. "I hardly ever listen to anything I've played. When I listen there's always something where I say, 'Why the hell did I play that phrase?' When you're improvising you don't have time to judge or fiddle about with what you're playing. It's not like composing, where you can take your time. If I could get into the same trancelike state that I get into when I'm writing, I could play a good solo. But I've never reached it."

That kind of harsh self-criticism astounds devotees like Douglas, who recently invited Wheeler to play Booker Little's compositions with him. "I think he's absolutely an original stylist on the trumpet," says Douglas. "It's amazing to me that he's not more respected and known."

Wheeler is not sure he wants that. "I don't try to be a mentor to younger players. I suppose I feel a little uncomfortable that young people are trying to play my music. I'm quite happy to be a little bit unknown. I wouldn't last very long with fame and riches."

His discomfort with recognition has influenced his decision to remain in London. "I feel much more comfortable in a big city because I can walk for hours and no one notices me. If you walk along in the country, the farmer's dog comes out and barks at you, or people look up at the stranger passing by."

Although he recognizes the advantages of basing a musical career in New York City, he isn't sorry he decided not to move there. "I've only played New York maybe 10 times, and I definitely have the feeling I'm in a foreign country."

His diffident manner and soft voice, which has taken on a light English accent over the years, give Wheeler an aura of sad resignation, but he rejects the notion that he has regrets. "I feel as happy with my life as a person could be. I get to play good music a lot, and I'm doing what I like for a living."