I'm currently listening, filled with emotion, to a 17-hour live radio tribute to drummer Ronald Shannon Jackson on WKCR-FM. I had just arrived at the Quebec City Jazz Festival when I learned that Jackson had died of leukemia. 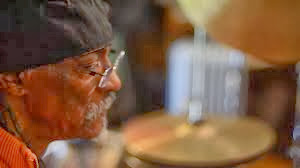 Jackson's music was a mainstay of the radio program I co-hosted with my friend Don Lahey in the early 1980s, and I continue to feel that he was one of the most creative composers of that rich era. As a drummer? Well, as a former drum student who once convinced my teacher to break down a typical Jackson fill for me and teach me to play it, all I can say is that his ability behind the kit was superhuman. That shit was hard!

One of the highlights of the time I spent in jazz festival administration in the late '80s was the day that Jackson arrived to play our festival. We had programmed a mini-tribute to Ornette Coleman that year, with Jackson on one outdoor stage (with his three-guitar lineup, featuring the incredible Jef Lee Johnson) and Coleman himself on our main stage indoors.

I remember Jackson's equipment rider almost drove our volunteer stage crew around the bend. I think he was the first artist we had ever booked who brought his own sound guy and demanded an active monitor mix. And his drum kit was HUGE.

We had a request for a radio interview with Jackson, but it wasn't scheduled until a couple of hours after the band's soundcheck. I thought this might be a problem, but Jackson happily accepted my invitation to hang out with me in our administration trailer and drink beer. We had a great time, during which he told me about his journey to Africa, which he undertook on his own with just a minimum of clothing and a hand drum. He had a terrific, uplifting view of life, and of course a wealth of stories about working with Cecil Taylor, Albert Ayler and Coleman. Needless to say, I was in heaven.

Two other things I recall about that day, and both reveal a private side of the man.

The first was one of the most uncomfortable things I ever had to do in that role, and that involved asking Jackson if he minded if the opening act used his drum kit. His stage setup was so extensive that there was no room for the opening act to set up in front of it, and the crew didn't think there would be time to strike Jackson's kit and re-set it. If we hadn't spent two hours hanging out over beer in the trailer, he might have punched me; instead, he looked at me with a pained expression and said: "Man, I let Sunny Murray use my drums once and he fucked them up. No!" He was laughing as he said it, but the 'no' was emphatic.

The second memory—and a lasting one—is from after his show. We had dodged a thunder storm during his show (the next morning's newspaper had an incredible photo of Jackson's band on stage with storm clouds amassed overhead and a halo of light above the stage) and we were de-stressing outside the dressing room that was adjacent to the stage. In those years, our outdoor stage was built on the bank of the Rideau Canal, so were overlooking the lights along the canal and the greenery that ran along its sides. Jackson had hoped that his old friend, saxophonist Billy Robinson—a longtime resident of Ottawa—would show up to see him perform, and he was reminiscing about growing up in Texas. He told me how much he loved the Texas countryside—antithetical, I thought, for someone who's music sounded so urban—and he said: "James, you have a beautiful city. It's like a city set in the country."

He had a plane to catch for Japan the next day, so he passed on my invitation to join me for the late show by Archie Shepp at one of our other venues. I never saw him again, but his music, and those memories of a brief time shared have stayed strong in my heart.

I always admired his drumming, so propulsive and complex yet never cluttered. But, more I was passionate about his composition – a bridge between rock and "jazz" sensibilities, melodies and vamps that rode on top of his rhythmic cadences with so much sense, delight and purpose.