Those words are a touchstone phrase of Bruce Springsteen's heroic "This Hard Land," but might serve as the artistic mission statement of Lou Reed. 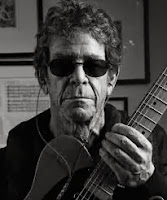 As illustrated by the outpouring of sorrow and appreciation since his death was announced on Sunday afternoon, Reed had achieved the kind of status that Springsteen, Bob Dylan and only a few other songwriters from the '60s and '70s have reached.

Over the course of a 50-plus year career it's not unusual for artists to lose their focus, soften their edges, and take it easy on themselves and their audiences. Not Lou Reed. As those who knew him say, he had a soft side to be sure, but he was not a man who compromised his artistic vision. And, of course, God help the fools who thought he was just a jukebox who could be persuaded to regurgitate the decades-old songs they wanted to hear.

I last saw Reed in person at the Festival International de Jazz de Montreal in a trio with his wife Laurie Anderson and John Zorn. I can't imagine that anyone would approach that setting with the hope that the musicians would set aside their own ideas to play "Walk On The Wild Side" or "Sweet Jane," but there were a few calls for those hits, and you could feel the tension rise each time an audience member voiced a request.

Eventually, Zorn suggested that anyone expecting to hear FM-friendly songs from Reed's catalogue should leave the room, and a number did. A few others launched catcalls against the thick slabs of electronic sounds that Reed, Anderson and Zorn created.

I've never understood people who don't have the patience to hear the latest idea created by artists who have moved them in the past, but Reed summed it up nicely in something he said to journalist Martin Johnson, and quoted by Martin in a wonderful Facebook post this morning: "Sometimes you have to remember that the audience just doesn't have ears. They have these little things attached to the side of their heads, but they don't know how to use them."

Reed took his cues from the uncompromising artists he admired, and we are the richer for it.
Posted by James Hale at 11:55 AM

And if all I have are the memories of those "hits", the songs that moved me as a teenager, then that's enough. But for me, it's not just that someone who wrote cool songs that I loved as a 15-year old has died. It's that he was an artist who expanded my ideas of what is normal, allowed, OK. "Transformer", all on its own, does that. It says, "See these outsiders? Well they're not much different than you."

I thank Lou Reed for creating an important part of the soundtrack of my youth. I admire him for continuing to explore and innovate musically.