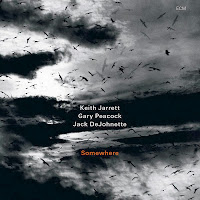 Keith Jarrett/Gary Peacock/Jack DeJohnette: Somewhere (ECM) – The pianist’s so-called Standards Trio marked its 30th anniversary with a live recording from 2009 that is exceptional in both execution and breadth of programming. From my five-star  DownBeat review: “As Jarrett’s other endeavours have receded and the trio has grown into one of the jazz world’s most sought-after concert acts, the unit has become a vehicle for the pianist’s various signatures. In fact, Somewhere serves up a cross-section of pianistic styles beyond Jarrett’s native devices, touching on stride for a highly percussive “Between The Devil And The Deep Blue Sea” and bop for a steaming “Tonight.”


Myra Melford: Life Carries Me This Way (Firehouse 12) – A new recording by the Chicago native, now living and teaching in the Bay Area, is always a cause for close listening, and this solo recording repays that investment many times over. Like Marilyn Crispell, Melford has begun to temper her highly percussive, hard-edged playing with a more lyrical approach, and, although they still contain many thorny phrases and atonal turns, the 11 pieces on Life Carries Me This Way are among her most melodic and moving.

Charles Lloyd/Jason Moran: Hagar’s Song (ECM) – Lloyd and Moran seem to have a special relationship; the veteran saxophonist—who has engaged a long series of exceptional pianists, from Keith Jarrett to Geri Allen—beams onstage when Moran plays, and I have seen him dance with joy to the pianist’s accompaniment. Playing duets on pieces that range from Earl Hines and Duke Ellington to Bob Dylan and Brian Wilson, they sound like they were born to play together, both highly individual-sounding musicians with no prejudices about the provenance of their material.

Dave Douglas Quintet: Time Travel (Greenleaf Music) – It is tempting to view Dave Douglas’ recent recordings as a resurgence, but the trumpeter has never had a fallow period. Still, he seems to have found a way to take his composing and playing to a higher plane than he usually occupies, which is really saying something. Give some credit to his new-ish quintet, who provide him with an exceptionally broad set of voices and have the tools to follow him whether he moves in or out.

Christine Jensen Jazz Orchestra: Habitat (Justin Time) – Like a technology start-up company in stealth mode, Montreal-based composer and alto saxophonist Jensen has quietly developed into a bandleader to be considered in the same terms as Maria Schneider and John Hollenbeck, which is to say that her big band has a book full of exceptionally written and arranged compositions, and is chock full of terrific musicians to convey them. Although sister Ingrid Jensen is the highest profile soloist, the band has no shortage of star players. Personality abounds in both the writing and performing.

Chris Potter: The Sirens (ECM) – High concept recordings seldom live up to their central conceit, and when your guiding concept is to create a musical interpretation of Homer’s The Odyssey you are really setting sail on choppy seas. The much-recorded Potter—most valuable player on recordings by Dave Douglas, Dave Holland, Paul Motian, and numerous others—has never seemed to be a high concept kind of guy (not when compared to near-peer Joe Lovano, at least) but for an ECM debut so deep into your career, why not? Joined by a stellar crew (Craig Taborn and David Virelles on keyboards, Eric Harland, and Larry Grenadier) Potter scales new heights of lyricism and emotion here.

she recruited 33-year-old British trumpeter Tom Arthurs, and he steals the show with romantic lyricism reminiscent of Kenny Wheeler, a warm tone and a storyteller’s melodic voice. Engineer Jan Erik Kongshaug achieves a depth and clarity that qualifies him as the fifth band member.

Ian Carey Quintet + 1: Roads and Codes (Kabocha) – Bay Area trumpeter Ian Carey was the discovery of the year for me. On the inventively conceived Roads and Codes, he made great use of his highly skilled band of improvisers by writing to their strengths—a lesson gleaned from his mentor Maria Schneider. The program—an arty mix of pieces by Neil Young, Igor Stravinsky, Charles Ives and his own harmonically pleasing compositions—covers a lot of ground, and does it all well.

Ben Goldberg: Unfold Ordinary Mind (BAG Production) – One of two recordings that arrived simultaneously from clarinetist Goldberg, this one immediately grabbed the ear for its unusual lineup of three reeds (Goldberg, Ellery Eskelin, and Rob Sudduth), electric guitar (Nels Cline) and drums (Ches Smith). Intense and soulful, the band grooves hard and takes the kind of unexpected turns one might expect when Eskelin and Cline are onboard. Of the many bands on tap at January’s annual Winter Jazzfest in New York City, this one is at the top of my must-see list.

Quest: Circular Dreaming (Enja) – The co-operative quartet of Billy Hart, Richie Beirach, Ron McClure, and Dave Liebman channeled the music of Miles Davis’ mid-‘60s quintet. As I wrote in a four-star DownBeat review: “It’s not unusual to hear bands play (these) songs, composed primarily by Wayne Shorter and Tony Williams…but it’s rare to hear peers of Davis’ band members perform a full set of them, and do it this well.”
Posted by James Hale at 7:35 PM